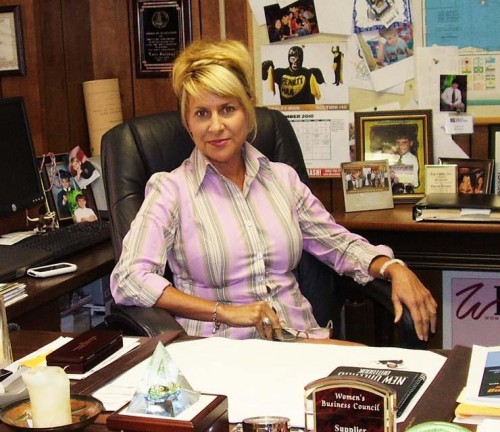 Residents along the Gulf Coast know all about the BP oil spill. Images of oil soaked beaches, marshes and wildlife have headlined the news for months.

But what about the impact on the oil industry itself?

The moratorium on deep-water exploration not only affects the big oil companies, but their support companies as well.

The company couldn’t have had a rougher start. It was the 1980’s and the oil industry was in a bind.

Davis and her sister Penny Molina bought out their father in 2002 and have continued to provide specialty chemicals to the oil and gas industry.

“We have a niche. We write procedures and design well bore displacements,” Davis explained.

A well bore is the drilling hole. Rig-Chem manufactures products designed to displace or clean out the drilling mud so the well can be prepared for the production phase.

All Rig-Chem products don’t serve the same purpose, but they’re all mainly used in the completion phase of the drilling operation – when the well has been drilled and identified as having potential.

“That’s when we get to work. The transition phase between drilling and production is our specialty,” the Houma native said.

Rig-Chem’s products have been developed through testing in labs and in the field to determine what chemicals work best with the drilling mud in use. They take mud samples and compatibility tests to ensure the chemicals provided are right for the job.

“We take raw materials and components and bring them together for our blends. Everything is very precise. Quality control has to be a priority,” Davis said.

The companies Rig-Chem does business with do their own testing as well for product consistency and performance.

“If the product isn’t what it’s always been, then it’s not going to perform the way it should and you won’t get another job. You’re only as good as your last job,” Davis said.

The mention of chemicals being injected into a well is reason to give anyone pause.

“Nothing we handle is a hazardous material and the majority of our products are environmentally friendly,” Davis explained.

The company files Tier 2 reports that are broad inventories of what components are being handled at the Thompson Road facility. Davis also registers all Rig-Chem chemicals with Chemtrec – a hazardous material communications center.

“That’s in the event that anything is spilled because of an accident on site or while in transport. There’s a number that you call and Chemtrec knows how that product needs to be handled,” Davis explained.

The BP spill and subsequent deep-water exploration moratorium has meant a sharp decline in business for the Houma company.

“We’re not working. We lost 70 percent of our business since the moratorium has been put in place so we’re really struggling to keep people employed,” Davis said.

Rig-Chem’s owners have cut expenses to a minimum to save salaries and ultimately jobs.

“We have enough cash in reserve to be able to maintain what we’re doing until probably December. Everybody (here) knows that in December we’ll really have to make adjustments,” Davis said.

The business co-owner has been trying to get the word out about the plight of the small business in the wake of the BP spill.

“I’ve been speaking and I testified at the Senate Small Business Committee hearing in Lafayette about a month ago,” Davis said.

“There’s obviously not as much national media attention but we have to do everything we can to make sure people understand that’s it’s not over,” she continued.

Davis is concerned that the unemployment numbers won’t show the true picture of the moratorium’s impact. She said independent contractors out of jobs can’t file for unemployment and companies laying off workers are leaving those positions unfilled.

When the moratorium is lifted, Davis believes the industry will have many hurdles to cross before work can resume. New regulations, safety requirements and higher insurance costs being just a few.

“The time it will take everyone to get back to work will probably depend on how good of a job they’ve done by getting their requirements up to par,” Davis explained.

Things may be tight but there are no plans to close Rig-Chem’s doors.

“We may be a different company after December. Not so much in name but in size or product line or thinking. This is forcing us to think in a different way but we’re not going to ever close the doors,” Davis said.

“We’ve worked internationally for quite a few years in certain areas. Right now we definitely have a stronger focus on moving our opportunities overseas,” Davis said.

That doesn’t mean the company will physically leave the area. Davis explained any jobs outside the U.S. can still be supported by her local office.

“People don’t understand this industry – they really don’t. We need to make sure people know what we do and that we are a safe industry and that we do care about the environment,” Davis said.

“What happened with BP is like a perfect storm. Anything that could have gone wrong did. But that doesn’t mean that everybody will operate that same way and it doesn’t mean it will ever happen again,” Davis said.

“This is worse than what happened in the ’80s. Then it was a lack of business. Now, somebody has just shut off the switch – it’s a planned event. It’s nothing we were prepared for and it’s just wrong to do that to an industry.”

Rig-Chem co-owner Lori Davis says her company is seeing some lean times right now but has no plans to close her doors. Her family has been connected to Rig-Chem since 1983, when her father bought into the business. JENNIE CHILDS