‘There’s nothing impossible’ at Brown’s Jewelers 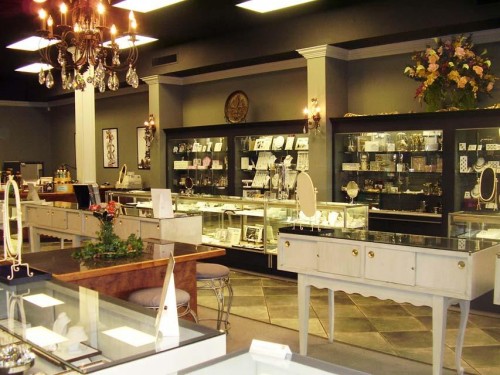 Traditionally, June is the pinnacle of the bridal season. Couples visit jewelry store after jewelry store in the search for the ultimate expression of their feelings toward each other.

Since the 1960s, Brown’s Jewelers in Morgan City has been guiding area shoppers in their search for the perfect gemstone.

The store started out as part of a larger department store called Brown’s Thrift City. Herbert Brown had the idea to create a store offering clothing, hardware, shoes, groceries and jewelry. Each department was leased to individual owners – the jewelry section was owned by Paul Castille.

Around the same time, Price Hains Jr. was a cook at a local restaurant. “My daddy pulled me aside and said ‘Hey, I want to teach you this. You can make a living doing this’,” the younger Hains said.

Apprenticing under his father and jeweler/watchmaker Willard Briggs, Price Jr. eventually worked his way up to manager.

Eventually, Castille began selling the stores and Price Jr. bought the last of the original Brown’s Jewelers in 1977. He kept the name in honor of the store’s history.

The outside of Brown’s Jewelers is best described as ordinary.

“There’s not too much I can do on the outside store front because it’s in a shopping center. But a lot of people say when they walk in it’s like being in another world,” Price Jr. said.

French provincial jewelry cases inherited from the elder Hains greet customers when they get their first glimpse of the spacious chandelier-lit showroom.

“When you walk in, you’ll see we’re real people. We have a sense of humor. It’s fun to shop here,” Price Jr. said.

Loose diamonds and engagement rings are the main attraction at Brown’s with Tacori leading the way. “It’s an exclusive line. Not just anybody can get it,” Price Jr. explained.

Kirk Kara has many designs on display including a Brown’s exclusive – a fleur de lis engagement ring.

A new addition to the store is the Pandora line of rings, necklaces, earrings and bracelets. Customers choose from a large selection of stone, gold and silver pendants and charms to create their own one-of-a-kind look.

Large displays show off Seiko and Pulsar watches, Lorenzo sterling and gold, Imperial pearls, Camelot Bridal and a wide variety of gifts for the bride and groom or mother-to-be. Brown’s also carries a large selection of Saints and LSU jewelry and gifts.

But the diamonds are the real stars of the show.

For the uninitiated, diamond shopping can be a daunting experience. Enduring all the talk about the four “C’s” – carat, clarity, color and cut – can be intimidating.

“A lot of jewelers just talk about color and clarity. We also emphasize cut because if the diamond doesn’t have the right proportions, it won’t matter what color or clarity it has,” the storeowner said.

To emphasize the point, Price Jr. has acquired a tool he says not many other jewelers have.

The Clarity Master allows him to magnify a diamond completely filling up a 24-inch television screen. This view shows up-close details of a stone helping customers understand what cut and clarity are all about.

“Under magnification you can see the imperfections in the diamond where the carbon didn’t crystallize. Dealers call them identifying characteristics, which means they’re flaws,” Price Jr. explained.

Brown’s Jewelers’ diamonds are documented to ensure their quality.

It’s been said that when all other investments are on shaky ground, gold is always a good choice. But Price Jr. thinks diamonds should be considered as well.

“When I first started in the business a nice one-carat diamond was $650. Today it would be in the $12,000 range. Diamonds fluctuate sometimes but they haven’t in a long time,” he said.

A troy ounce is the unit of weight used for precious metals. It’s slightly heavier than the more common ounce coming in at 1.097.

For those haggard shoppers in a panic over last-minute gifts, Brown’s has the wish book.

“I tell people don’t come crying to me because you didn’t come in and sign the wish book or you didn’t tell your husband to come in and look at the wish book. If someone didn’t get what they want for Christmas or their birthday, it’s not my fault,” Price Jr. jokes.

No jewelry store can have every brand or style of jewelry ever created in house and Brown’s Jewelry is no exception.

“There’s probably nothing on Earth we can’t get. We have accounts with a lot of diamond and watch dealers and can get almost anything you want,” the jeweler said. “Don’t leave if you can’t find what you’re looking for. There’s nothing impossible here.”

Brown’s Jewelers in Morgan City has been bustling since the 1960s. It has evolved into a local “gem” for area shoppers. * Photo by JENNIE CHILDS