Waterland Louisiana gears up for season with expansion 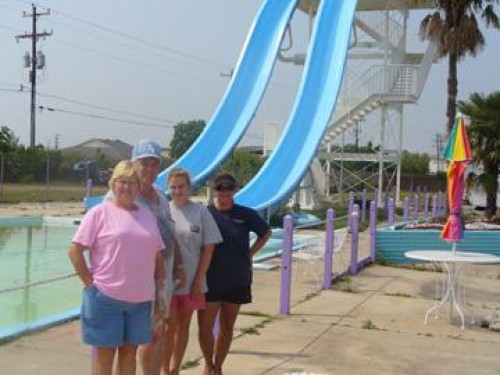 When Sandy Diggs calls Waterland Louisiana a family-oriented business, she means it in more ways than one.

On one hand, Diggs’ goal for Houma’s only water park is to make it a place where area families know a good time can be had, in a safe environment.

On the other hand, Waterland Louisiana truly is owned by nearly the entire Diggs family. Sandy and her husband Ricky, own the water park with their son Ricky Diggs Jr., and his wife Christy, along with their daughter Misty Brunet and her husband Lanny Brunet.

The family closed on the purchase of Waterland last September, and has been preparing for the opening since then. That job is nearly complete, with the season set to begin this Saturday. “All of the attractions are going to be open,” said Sandy. “That’s been our main focus, is getting everything back up, and getting everything running again.”

Along with the regulars — the Sonic Chute, Blue Runner, Magic Wave, Lazy River and Yellow Duck — there will be a snowball stand and a pizza kitchen, this year. There is also an 18-hole mini-golf course.

When the Diggs’ bought the 23-year-old park, it was in danger of shutting down. Sandy said that the previous owner had an offer on the table for the purchase of just the land. In came the Diggs’: “Her (deceased) husband loved this place,” Sandy said of the previous owner, “and she wanted it to remain a water park. I think that’s why she jumped on it when we said we would like to keep it a water park. Houma needs it.”

At the time of the purchase, the towers for the park’s two largest waterslides — the Sonic Chute and the Blue Runner — had been condemned. Since then, the Diggs’ have put over $300,000 into repairing those towers. “Both of the towers have been rebuilt, and they’re ready to go,” said Sandy.

And that hasn’t even accomplished everything the family wanted to have done. “We had a lot more planned,” explained Sandy, “but it cost so much more than we anticipated.”

According to Sandy, future plans include a go-kart track and more water attractions. “Eventually, we want to have this place open year-round,” she said.

For that to happen, the game rooms will be expanded, with kiddy games on the bottom floor, and more advanced video games on the second floor. “We’re going to pack what we can in here,” she said.

Other features include birthday parties and new pricing for spectators.

Birthday parties must have a minimum of 10 kids, with each child’s price being $15.95 for pizza or a hotdog, a drink and an all-day stay at the water park.

Parents going to the park to watch their children swim no longer have to pay full price, as spectator pricing is now $9.95. “My husband and I were talking about when we got here, we brought our grandkids, and him and I had to pay full price,” said Sandy. “That’s why we changed the pricing. We’re trying to make it more family-oriented.

“I want it to be safe, to where parents feel like they can drop their kids off.”

And the Diggs’ grandkids are playing a role in the family-owned facility. “I already told them,” Sandy said of the grandkids. “When they get old enough, they’ll get to play, but they’ll have chores and work.

“They’ll start gradually moving into the family business,” she added, while smiling.

Season: May 18 though Labor Day weekend