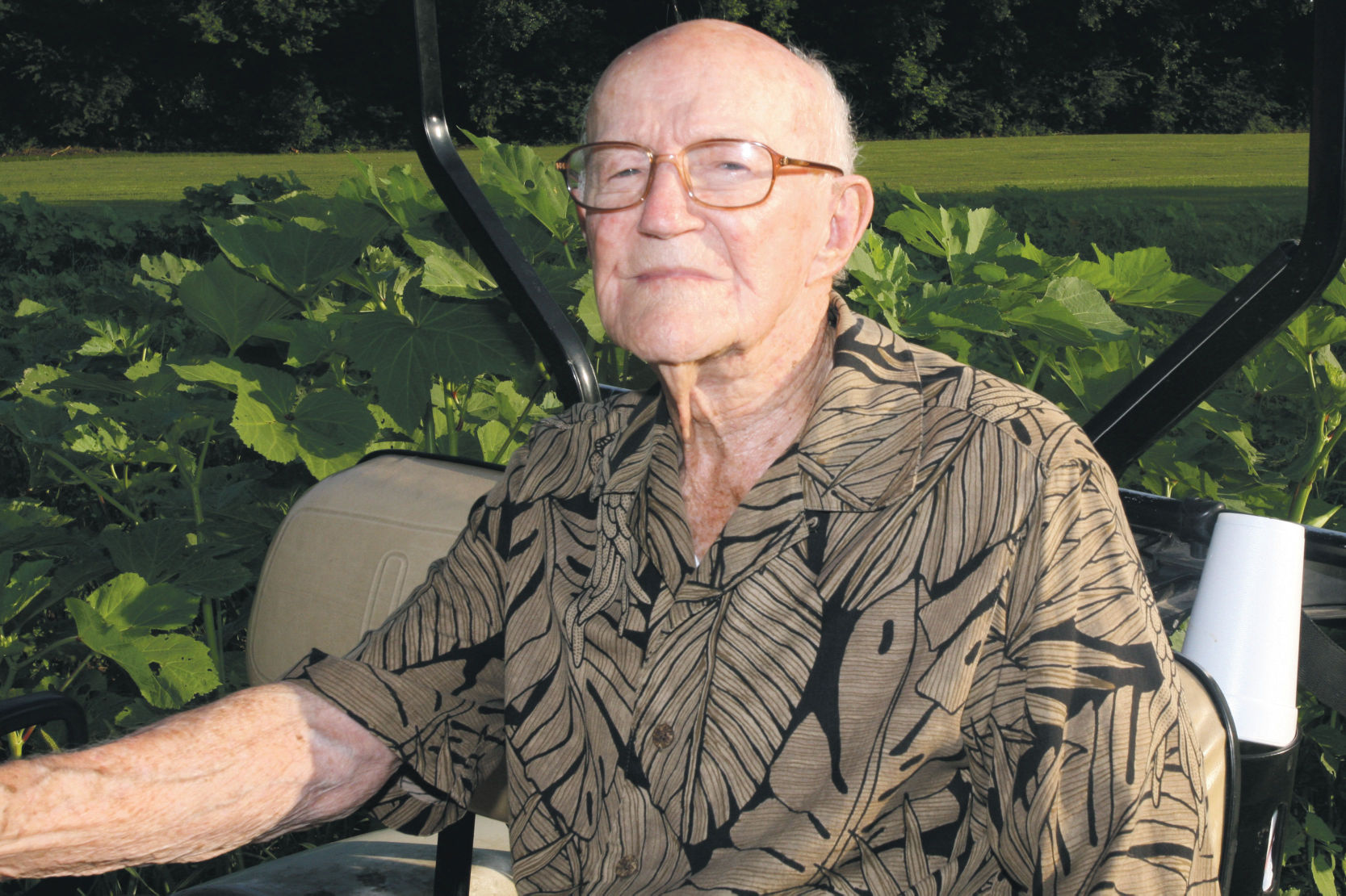 Melvin Hebert, now 97 and “looking forward to 100,” pours over old photo albums and remembers his life as an educator.

He pulls out one photo. It’s a human skeleton on display in front of the schoolhouse on Pecan Island circa 1940. “Now that’s a good story,” he says grinning.

Melvin’s whole life, as it turns out, is a good story. It began in the small French-speaking town of Kaplan in 1917. He was the youngest of Remy and Nella Guidry Hebert’s seven children. The family was “very poor.”

Early on, Kaplan had no paved streets, just dirt roads. Mail was delivered by horseback. To fight mosquitos, “we’d burn hay in a bucket inside the house and use mosquito netting.”

Remy and Nella Hebert slept in the family’s only bed. The children slept on a mattress filled with Spanish moss on the floor.

“The bathroom was an outhouse, water was from a well, cooking was done on a wood-burning stove and a kerosene lamp was our only source of light,” Melvin recalls. “We had chickens, hogs and cows. We’d submerge the milk jug in the well water to keep it cool. We made our own soap with hog fat and lye.”

To support his family, Remy Hebert cut grass, worked for the Kaplan Rice Company, helped pour cement sidewalks – whatever work he could find. Melvin remembers people working in the rice fields from sun-up to sundown pulling Indigo grass for $5 a day.

As a child, Melvin was taken to traiteurs or faith healers for toothaches and other pains and maladies, but it was a trip to a real doctor that remains his most vivid childhood memory.

“When I was 5, a doctor was advertising tonsillectomies for $5. My mother had my older sister take me to get that operation. I sat on a hard chair holding a pan under my chin while the doctor clipped my tonsils using no anesthetic. They kept me sitting on a bench for an hour after the operation then sent me home. No anesthetic!” he repeats, shuddering at the memory of the pain.

Because people were uneducated, peddlers would sell remedies out of their medicine wagons allegedly guaranteed to cure everything “from boils to liver complaints,” he says.

“The common treatment for worms was a dose of castor oil, a string of garlic hung around the neck and a teaspoon of sugar with three drops of turpentine,” Melvin explains.

Contraception wasn’t available then, but a common belief was that women couldn’t get pregnant when they were nursing. Many women breastfed their children until they were 3 or 4 years old.

Melvin started school at age 6. A one-room building with a tiny wood stove for heat.

Maude Guidry was the teacher at the one-room schoolhouse.

“Teachers were highly respected back then,” Melvin recalls.

The school had a hand-cranked phonograph and “it was a mystery to me how a machine could talk,” he said.

The school’s students – “maybe 100 kids, most of them barefoot” – arrived each day in wagons, horse-drawn buggies or on horseback. For most, shoes were a luxury beyond their family’s meager earnings.

Because the Hebert family lived near the school, Melvin went home each day for lunch.

English was the spoken language, then. Those caught speaking their family’s native Cajun French in school were paddled.

The highlight of Melvin’s grade school years came when an airplane landed near a baseball park close to the school.

“We were so excited, we all ran out to see it, even the teacher,” he still remembers.

When Melvin was 9 or 10 years old, he joined the Boy Scouts and learned to play the bugle, earning him a free spot at Camp Washington each summer. The skills would come in later when he joined the U.S. Coast Guard. Over his four or five years as a scout, Melvin earned several merit badges and earned the rank of Star Scout.

Always a hard worker, Melvin spent his days away from class cutting grass, pushing wagons full of rice, picking cotton and milking cows. It proved to be a confidence builder.

“I never felt less than someone who was wealthier,” he said. “It’s important in life to have confidence in yourself. It changes your perspective no matter how destitute you may be.”

Melvin’s athletic abilities shone in high school. A member of the track team, “I could jump higher than my height,” he proudly recalls, “but my French held me back academically.”

He became a skillful boxer as well, which impressed the father of a friend who offered to send him to college. “I had to promise him I would stay away from women because he said they were expensive,” Melvin noted, laughing.

After graduating from high school in 1935, Melvin enrolled in Southwestern Louisiana Institute in Lafayette.

He made the trek to school via bus, but soon met a family with a car. In exchange for labor, he was given free room-and-board his freshman and sophomore years. Melvin found another family with a large rooming house and exchanged odd jobs for a place to live.

In 1939, Melvin earned a bachelor’s degree in education from the institute.

He immediately returned to his roots, accepting a teaching job on Pecan Island, about 40 miles south of Kaplan.

Pecan Island was surrounded by White Lake on the north and the Gulf of Mexico to the south. Settled by a Texan, English was the native language. By 1939, it served a bit as a hunting resort. Residents also farmed, trapped and fished. Mailboat provided the lone access.

Life of the island was rustic. The main road was shell-covered. Water was collected in cisterns and the island had no electricity. Battery-operated lights kept the school illuminated, and coal oil lamps were used at the home.

The Rockefeller Foundation Wildlife Sanctuary was situated on the south side of Pecan Island.

For $75 monthly, Melvin was assistant principal. The school taught about 200 students in grades 1-11. There was no senior class.

A bicycle provided island wheels, and a skiff allowed him to crab. Fishing was limited to using “a pole made out of a broom handle with a sharp nail embedded at one end,” Melvin said. Otherwise, he whittled time playing basketball with other students.

A student approach Melvin one day and said his father found a human skeleton while he was plowing. Back in those days, there was no CSI or even any interest in finding out whose remains it was. Native Americans once inhabited the island. Melvin theorized the bones could have belonged to a Native American, storm victim or even a Civil War deserter.

With the aid of an encyclopedia and dictionary, Melvin set out to teach students about the human body using the skeleton.

“The kids learned a lot by identifying the bones,” he said. “We took a picture of it after it was assembled and wrote a little story and sent it to the Department of Education in Baton Rouge. We got a letter back commending us on a successful project.”

The next three years were spent teaching at Pecan Islands. Summers, he taught at Kaplan. “It was just something I’ve liked to do all my life” he says, “helping kids.”

Melvin saved to buy his parents a Kaplan house for $500. It was located three blocks from Main Street.

Melvin was listening to his transistor radio Dec. 7, 1941, when it was announced the Japanese had bombed Pearl Harbor. “I knew I would be in that war,” he said. He traveled to New Orleans and signed with the Coast Guard.

When a commanding officer asked if anyone could speak, read and write French, Melvin’s hand shot up.

“At first I was patrolling the Gulf [of Mexico] because German subs were sinking American ships, but I was quickly attached to the personnel office where my French was needed to communicate with the locals.”

All coastal fishers were required to carry an ID card during the war. “I learned finger-printing and had to interpret the baptismal certificates, which were all in French,” Melvin said.

Life changed abruptly for Melvin at a Houma dance hall. He met Mae Ellender, his future wife and mother of his two daughters and son.

Shortly after the couple married, Melvin was reassigned to New Orleans. Mae took a job as a waitress at Cafe du Monde.

“Soon, I was attached to a frigate that was going overseas. As I was telling Mae about my new orders I heard a newsboy yelling that the atom bomb had just been dropped on Nagasaki,” Melvin said. He was discharged from the military shortly after.

Melvin passed on a principal job in Vermillion because Mae didn’t want to leave Terrebonne. In 1946, he was hired to replace a retiring principal at Boudreaux Canal Elementary School. Comprised of about 350 to 400 students – first through sixth graders – he’d call it home for nine years. Similar to Pecan Island, the students’ parents were hard-working people: fishermen, trappers and shrimpers.

Melvin’s next job was principal of Bourg Elementary School. Cadiovascular Insitute of the South founder Dr. Craig Walker and District Judge David Arceneaux were both students at the time.

After five years at Bourg Elementary, Melvin moved to his final teaching post – Oaklawn Elementary School. He held the job for another 15 years.

Oaklawn went through a number of transitions on Melvin’s watch. It went from an elementary school to a junior high. It also underwent integration.

“I got 10-12 teachers and 300 students from Southdown,” Melvin recalled. “It was a tremendous job to merge not only people but the different school policies as well. But we did it and it was peaceful.”

During that time, Melvin also returned to school, earning his master’s plus 30 in education.

Long after retirement, Mae fell ill. Ever the faithful caretaker, Melvin stayed by her side for the next 10 years until her death on Mother’s Day in 2006.

“For a long time, I was sad and lonely, then I met a group of caring friends at Jack’s Bar where my granddaughter was bartending,” he explained.

Every year now the group and the bar throw Melvin a birthday party. “I dance with former students, like Jean LeBouef, who I taught 60 years ago in Bourg,” he said, laughing at the turn of events.

As for advice he’d share with today’s youth, Melvin’s words are simple.

“Life is what you make it. Take good care of it,” he said. “Think positive. Don’t dwell on the negative.”

As for tending to one’s health, the former teacher/principal winks and advises, “Keep moving, like a shark.”

Melvin returned to Pecan Island sometime after Hurricane Katrina struck in 2005. It was the first time he’d been back since departing in 1942. His former house was still standing, but the school had been sold and abandoned.

“Still, I was able to get a glimpse of the room where my teaching career had started,” he said. “As I walked away, I was flooded with all the great memories I had of my time there.”

Very characteristic of a gentleman determined to live to 100 – seeing the toll years have taken and always seeing the glass half-full.

Melvin Hebert, 97, was raised in Kaplan and when on to become a teacher on Pecan Island. He later served as assistant principal at Boudreaux Canal Elementary and Bourg Elementary schools, and ended his career Oaklawn elementary and middle schools. Hebert remains active, tooking around his yard, checking his garden, in his golf cart.