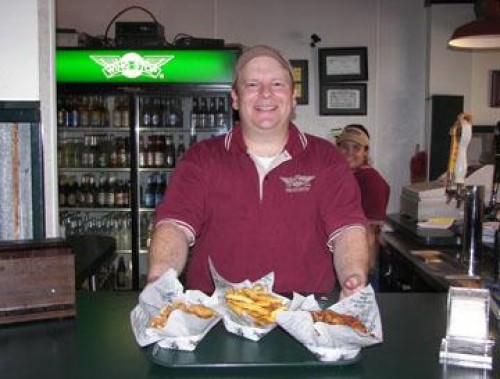 Pretty soon every piece of the chicken will have its own restaurant n breasts already have Chick-Fil-A and Cane’s, wings have Wingstop and WOW (World of Wings), nuggets are tricked up as “McNuggets” at Mickey D’s.

I think it’s past time for the overlooked thigh, with its high meat-to-bone ratio and the darkest and most flavorful meat of all, to star at its own place. “Thigh Baby” or “Thigh, Thigh Again” could work. Drumsticks are inevitable, necks and backbones less so.

And how about giblets? Now there’s a high concept: “Gourmet Gizzards” or “”Livers You Won’t Gag On” or “Skynyrd’s Ynyrds” are still available, I believe.

But I digress, wildly.

Wingstop, a national franchise, has been in Houma for a couple of years, and has attracted and kept a sizable and devoted clientele. It keeps things very simple, concentrating on doing a very few things pretty well.

Housed in a strip mall on Corporate Drive, Wingstop is very intimate inside. The dÈcor is vintage aviation, with parts of planes (mainly the obvious ones) adorning the walls, which appear to be corrugated tin, distressed and pre-rusted for that working hangar look.

Just a few tables are fitted in the tiny room, with twin flat screens in the corners. Simple and not without soul.

The menu is … simple. Wings are it. Wings, fried to order, and then doused or rolled in sauce or seasoning. And not just the drumettes, but the outer section of the limb, the one with two bones and the meat intertwined between them. No part of the wing is wasted.

On our two trips there we tried the garlic parmesan, lemon pepper, teriyaki, hickory smoked barbeque, mild and Hawaiian varieties. And we liked them in that order.

The wings came as advertised, crispy fried, piping hot and fresh. They didn’t appear to be some sort of specially-grown giant wings, having the general size and consistency you would find in chicken from the supermarket.

The garlic parmesan and lemon pepper both had the best-tasting seasonings, and both had the initial whiff of slight decay that real butter or cheese emits (a good thing). The garlic parmesan struck the right balance of seasoning, complementing the meat without overpowering it. Same with the lemon pepper n the lemon zest imparted a tang that accentuated rather than overpowered.

The teriyaki fared best among the sauce-based varieties, as the dark thick sauce had the right of amount of sweet yin to harmonize with the tart yang. Nothing subtle about the barbeque; this was a military-issue Hummer of a sauce, smoky, thick and audacious. And lots of it.

The mild was the tamest version of the Buffalo-style numbers on the menus. Buffalo wings, dipped in a demonic red hot sauce, with heat dominating over light. Not a fan.

The Hawaiian came in last because it promised the most and delivered the least. It was still edible, just disappointing.

The sides were complementary, if not standout. The best of the lot were the fries n seemingly fresh-cut with some peelings left on (although I have my suspicions) the seasoning was subtly sweet and they were expertly fried. The bourbon “double-baked” beans did have a whiskey scent if sniffed, but were otherwise indistinguishable from Van Camp’s or Campbells.†

The potato salad was forgettable, although not quite enough to suit us (too creamy with big chunks of potato floating in the mustard/mayo sea). The carrot and celery sticks must have come along for the ride from an hors d’ oeuvre tray and the bread rolls reminded us of our school cafeteria’s version.

The service is self-derived, and we did a lot better on our second trip, learning that one has to make repeated trips to the counter for napkins, salt and pepper and utensils if one doesn’t know better and get plenty at first.

Wingstop is a simple solution to hunger and a hankering for the white/dark meat of the chicken. It stays grounded in that mission, not aiming to soar higher. In that it succeeds.