Sources: Villavaso out at Vandebilt 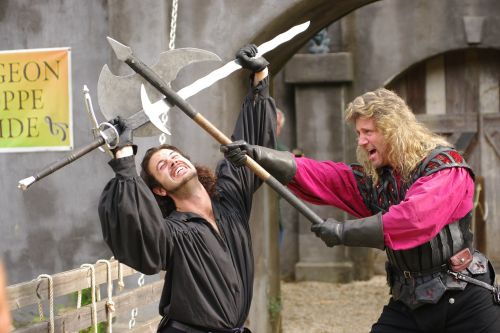 The Louisiana Renaissance Festival makes its yearly return, open every weekend this month as well as the first weekend of December. Located in Hammond, the festival celebrates its 13th year of operation. The events celebrate a culture and history not often discussed outside of the classroom, and provide a wealth of entertainment and education for those in Louisiana and neighboring states.

“People just fall in love with the ambiance,” founder Alvon Brumfield said. “It’s like when you go to your favorite restaurant; you don’t just go for the food, but for the whole experience. It’s like nothing you will see in Louisiana.”

Walking into the festival can be compared to a tangible time machine where electricity is very far off and glass blowers, jousters, blacksmiths and bakers welcome guests into the enchanted world in which they live. Romantic women with their hair in braids and men in shining armor interact with the guests to make the experience unforgettable.

“We take pride in the educational aspect of the festival,” Brumfield said. “You don’t typically come for the education, you come for fun but we put a lot of thought into it. You can participate in anything, and that’s what puts us apart from any other festival.”

Unlike typical Louisiana festivals, where attendees are more often spectators of bands or purchasers of food, the Renaissance Festival allows patrons to ask questions and participate in most of the activities. Guests are allowed to investigate the blacksmith’s trade and even help in the creation of a sword. Queen Elizabeth I (a celebrity at the yearly event) speaks with all of the guests and even has a new event this year – A Royal Tea, where anyone can drink with the queen.

“There is a whole interactive component that you won’t get anywhere else,” Brumfield said. “You want to talk to the queen? You can talk to her and ask anything about the history. If you watch the baking demonstration and you want to ask questions, he’ll answer you appropriately to the time. If you watch the candle making demo and want to try, you can. That’s what puts us apart from any other festival.”

Brumfield, also a practicing magician, first got a taste of the Renaissance while serving in the military. When a friend brought him to the Renaissance Festival in Tuscon, Ariz., he immediately fell in love.

“From the first walk into the gate – the sights, smells and ambiance – it was all amazing,” said Brumfield. “I thought, ‘Louisiana should have one of these.’”

Brumfield made the fair his weekend job for years until he got out of the military and began his plans to bring the Renaissance to Louisiana.

“I looked up where the Renaissance festivals were and there wasn’t a single one in Louisiana, Mississippi or Alabama,” Brumfield said. “So I wanted to make it where the roads would be easy. I thought, if I was going to be that close to home, I might as well put it where I’m from – Hammond.”

From its opening in 2000, the festival has grown to be a Louisiana favorite. The grounds feature 12 stages and hundreds of merchants and demonstrations. Since its debut, the festival started opening three days during the week, strictly to accommodate the amount of teachers and schools who wish to attend.

“Teachers kept calling us, and we finally broke down,” Brumfield said. “We’re open three days a week; last year we saw about 5,000 students per day. A lot of times kids have trouble relating to history, they get bored with lectures. But here they can actually see everything. It’s a little different when they can see it done rather than hear about it.”

More popular events include jousting and the falconry show. The jousting gets powerful reactions, as two men on horses run full speed toward one another in attempts to knock the other to the ground. Carnival rides, including a carrousel, stay true to the Renaissance fashion and are pushed by people instead of electricity.

“It’s a place to let imagination roam,” said Steven Brownlee, the festival’s bagpipe player and member of the Haggis Rampant along with his wife Pam and daughter Gillian. “You can use double entendres and say just about anything to anyone as long as you use the proper words, and it can mean anything three different ways. Rennies are very imaginative people.”

In addition to the sites to see, there is plenty of food to eat and some lesser known events to watch out for.

“The turkey legs are unexpected,” Brumfield said of the very large turkey legs. “Dualist is a popular show also – 10 steps to every epic dual. It features sword fights but is a comedy show. They invite you to heckle them if you’re brave enough. Back then it was okay to shout out and they would adjust to what was said. It makes each show different; if your phone rings and you’re dumb enough to answer, you’ll definitely be a part of the show. People laugh the whole time.”

The event has become so dear to people, they even facilitate weddings, as well as the occasional marriage proposal. Parties can get married on the private peninsula and even have a horse drawn carriage. It’s a place that allows people to use their imaginations and go back in time. The event is so beloved by many who attend and continue to attend each year. To find out more information, visit the website, www.larf.net.

Swordsmen battle at the Louisiana Renaissance Festival, set for every weekend in November and the first of December at its traditional location in Hammond. Adult admission is $17, and children 7-12 get in for $10.