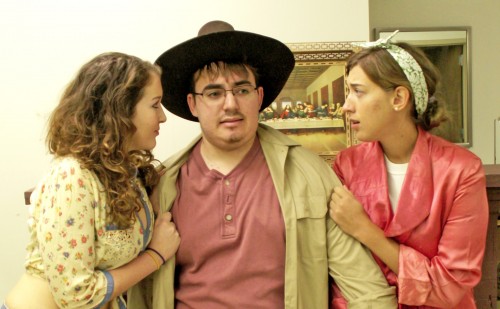 The Nicholls Players’ 14-year musical-less streak ends at the university’s Talbot Theater this month with the opening Oct. 20 of “The Great American Trailer Park Musical.”

NSU speech/theatre instructor and show producer Daniel Ruiz said the fast-paced comedy offers a familiar tone for locals. After all, when a stripper on the run struts into Armadillo Acres, the finest mobile home community in south Florida, residents’ accepting side shines through.

“That’s pretty much how we are in this area, too, I find,” Ruiz explained. “We’re not judgmental, for the most part.”

The script, described as “‘South Park’ meets ‘Desperate Housewives,'” centers around regular guy Norbert (played by Tyler Taquino) and his agoraphobic wife, Jeannie (Lisa Cunningham), whose marriage is threatened by the newcomer, stripper Pippi (Kami Ellender), who has man problems of her own following her, aka violent ex-boyfriend Duke (Gary Baker). The trailer park also plays home to a Greek-chorus-like trio of women – Linoleum, Betty and Pickles (Ivanna Brooks, Nancy Chauvin and Mercedes Hebert), each dysfunctional in her own right, who narrate the whole Jerry Springer-like story for audiences.

A student band accompanies the performers through the lively, if not cheesy, tunes. And NSU alum Andy Elliott directs, while choir director Angela Jones-Landry is musical director.

“What is so great about the show is that the lines and music are so relatable for so many of us,” Ruiz said. “South Louisianans welcome everyone – all types of people. We’re fiercely protective of each other, but we don’t judge. That’s what makes us unique.”

The Nicholls
Players’ 14-year musical-less streak ends at the university’s
Talbot Theater this month with the opening Oct. 20 of “The Great
American Trailer Park Musical.”