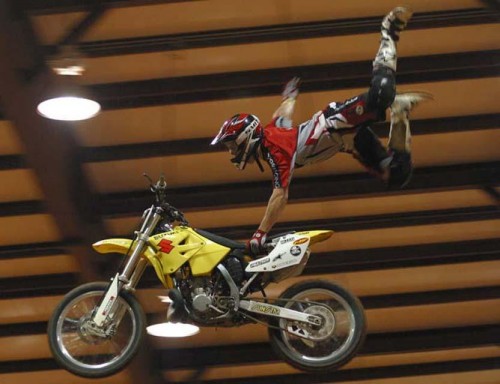 When it comes to mental toughness, the Monster Motornational’s FMX Superman Jam showcases the true “men of steel.”

The traveling show flies into the Houma-Terrebonne Civic Center Friday and Saturday (March 7 and 8) with an intrepid lineup of dirt-bike jumpers who aim to mesmerize the masses with their usual blend of dangerous aerial maneuvers.

Doors open both nights at 8 p.m.

“These guys are great athletes who perform stunts 40 feet in the air,” said event coordinator Tim “Bo” Bougus. “It’s unbelievable what they can do.”

One such stunt, known as the “Superman,” is one of the most gravity-defying in the business.

“The ‘Superman’ is when the rider lets go of the bike in midair and flies behind it like Superman,” Bougus described. “It’s one of the most well-known and most difficult tricks they do.”

Bougus couldn’t pin down the specific riders who will be coming to Houma, but for obvious reasons.

“These guys end up with broken arms and legs from time to time, so it’s always tough to determine who will be at the shows,” he professed.

The Superman Jam, which makes its second visit to Houma, will also include quad racing (pitting Team Louisiana against Team Mississippi) and freestyle remote-control Monster Trucks.

As an added feature, select spectators will also have an opportunity to rumble around in the X-treme Monster Ride Truck.

“We (Monster Motornationals) have also done a Monster Truck show (at the Civic Center), but we’re so confined with floor space that we just can’t put on the quality show we regularly put on,” Bougus said. “But the Superman Jam will have plenty of room for the riders to perform all of the tricks people see on TV.”

This is good news, as the motocross jumpers are the main sell. Riders compete for prize money and a trophy, and their success is gauged by the fans.

“The winner is determined by applause,” Bougus explained. “I think fans especially enjoy this because they’re actually involved in deciding who gets to take home a trophy.”

According to Bougus, the typical motocross demographic includes children, young males and “the X Games” crowd.

He expects to see them in full force at the Houma-Terrebonne Civic Center.

“I think this has good mass appeal to Houma fans,” Bougus said.

When: Friday and Saturday, March 7