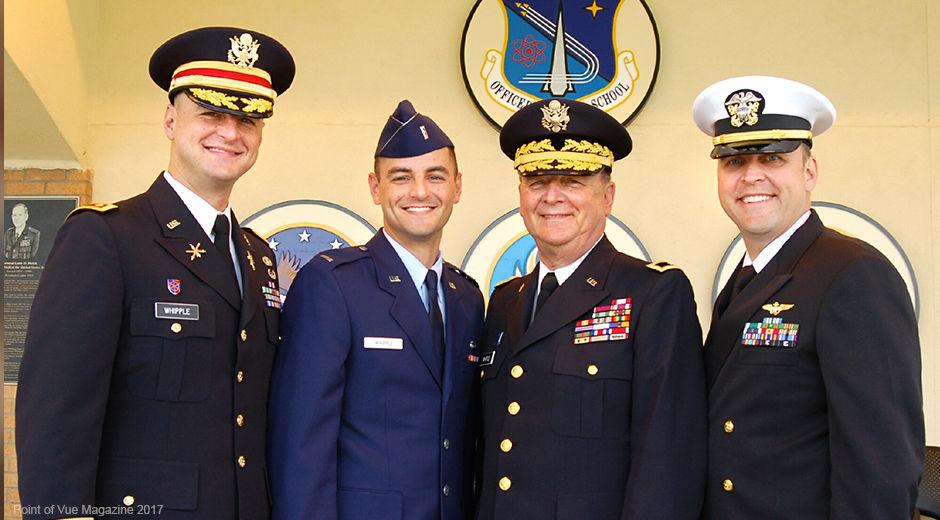 A Family Called to Serve

On a quiet street in Houma stands a sturdy brick home, not unlike others on the same street. But a few telltale signs alert the watchful eye to the presence of a military family. On a pole by the street flies Old Glory, her stoic stars and stripes floating high above, playing tag with the faint breeze in the evening sky. In the window facing the street hangs another type of flag, this one steeping in the tradition dating back to World War I, proudly showcasing three blue stars, each one representing a son in the service to his country. This is the home of the Whipple family.

In 1958, Gary Whipple enlisted in the Louisiana Army National Guard to avoid the imminent draft. He knew the odds were against him, so he completed basic training and served six months on active duty. He returned to Houma to the 2nd Battalion, 156th Infantry Regiment, 256th Infantry Brigade Combat Team, Charlie Company, known as the Black Sheep. Education remained a priority, so he dually enrolled at Nicholls State University, where he later earned a bachelor’s degree in social science education in 1946.

Gary pursued a master’s degree in counselor education to teach social studies courses at local schools and to participate in Louisiana’s 256th Infantry Brigade. In the ’70s, Mr. Gary joined the staff at Nicholls and completed his doctorate in psychology while climbing the military ladder. He soon fell in love with Patricia Hernandez, and the couple married in 1973. Over the years their family grew to include three sons, Cory, Gary Joe, and Brant, and a daughter, Trisha.

Gary continued to rise through the ranks, serving his country with such positions as commanding the 256th Infantry Brigade in Houma, serving on the Bold Shift Task Force and serving as Commander of Force Command, allowing him to travel around the country. In 1993 he was promoted to major general, the highest rank he could earn as a part-time officer. Gary relinquished his command in 1995 after serving 38 years in the Louisiana Army National Guard.

“I started from humble beginnings, persevered and stayed with it,” smiles Gary, reflecting on his years of service.

The General is now 77 but speaks of his time in the military with energy and laughter. When we begin to speak about his sons and their decisions to serve their country, the smile on his face reaches his eyes. This is a father that would be proud of his children no matter their career choice, but the fact they all followed in his footsteps boosts his pride a few notches. His children joined three different branches, the Navy, Army and Air Force, all active duty. But each carved out his own path in a unique way.

“My son Cory was bound and determined to join the Navy. He went to Tulane. He flew Naval aircraft and served 24 years on active duty. He was a Lieutenant Commander when he retired,” shares Gary. “The Navy served him well. He learned to fly, and now he flies airplanes for FedEx.”

“My second son, Gary Joe, decided he wanted to be in the Army. He joined ROTC at LSU. I gave the commencement speech for his ROTC… I bet he just loved that,” laughs Gary. “He has served in Afghanistan in several tours. He is now a Lieutenant Colonel and Director of Intelligence for the U.S. Army/Louisiana National Guard.”

“My youngest son Brant graduated from LSU then went to Loyola Law School. He joined the Air Force after law school, going in as a Lieutenant,” says Gary. “He has lived all over, including Japan and Hawaii.”

His sons echo their father’s statements of pride for their country. They admit that while the military wasn’t their first career choice as teenagers, they are all proud of the paths they have chosen.

“My dad never one time in my life even encouraged me to join the military,” laughs Major Brant Whipple. “In fact I think he thought I was just going to go to law school and join a firm or the District Attorney’s office. I don’t believe he ever saw the military in my future. I sure didn’t!”

Brant shares that most of his friends just assume the reason he is in the Air Force is because of his family. But truth be told, he had no interest in the military until his third year of law school when a few recruiters from the Judge Advocate General’s Corps (JAG Corps) stopped by to visit with the law students. The JAG Corps is a branch of the military concerned with military justice and military law.

“They starting saying that I could be in a courtroom right away, litigating,” recalls Brant. “I thought ‘That’s awesome. That’s what I want to do.’”

Brant planned for the career to perhaps be short lived, going in on active duty, serving his four years and getting the experience he needed to work for the United States District Attorney’s Office. He then figured he would join the National Guard and make a career out of that like his father.

“So much for four years,” Brant laughs. “I’m ten and a half years in now. I will retire with the Air Force at this point.”

His older brother Gary Joe shares a very similar story. He accepted a music scholarship to LSU, with a military life far from his mind. One weekend while at the family fishing camp in Toledo Bend, Gary Joe, Cory and Gary were watching “Apocalypse Now” and began talking about the military. Gary Joe decided to step foot into the ROTC office back at LSU and give it a try.

“I went to LSU to pursue music not military,” shares Gary Joe, “but I realized I wanted more than being a struggling musician. So after that weekend, I just decided to see what it was all about.”

Gary Joe was awarded a full scholarship with room and board at LSU thorough ROTC. It satisfied his requirements for basic training and a few other things. He contracted to be a commissioned officer his junior year. He changed his major from music to political science. The day he graduated from LSU was the day he received his commission and went on active duty. He now serves in the Active Guard Reserve at Jackson Barracks in New Orleans.

“I couldn’t be happier that they decided to join,” shares the retired General of his officer children. “I don’t think I ever thought they would all be in the military, but they make me proud.”