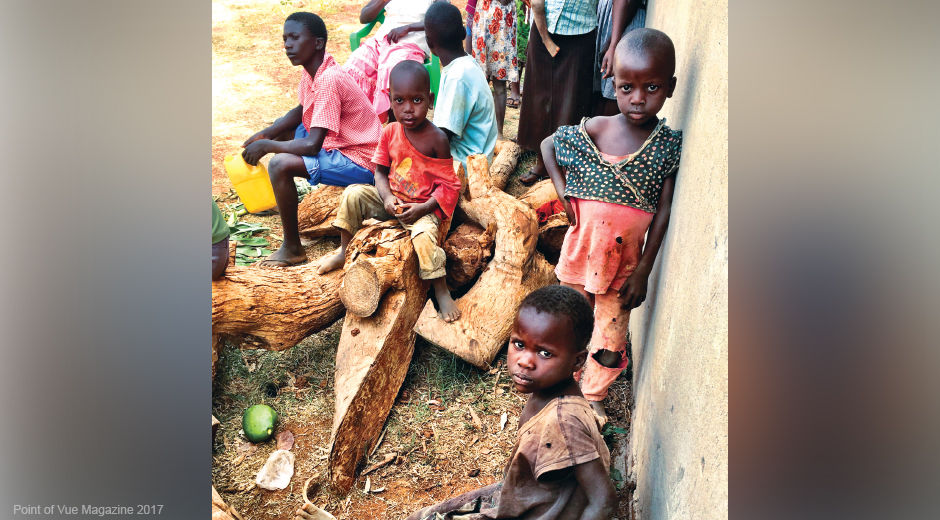 “Religion that is pure and undefiled before God the Father is this: to visit orphans and widows in their affliction, and to keep oneself unstained from the world.” – James 1:27 (ESV)

James writes that true religion is answering God’s call to care for those that cannot care for themselves. It’s a call to action that, while many find it difficult to respond to, has lead a small group of locals to build a beacon of hope in Uganda.

According to a UNICEF study, the east African nation of The Republic of Uganda has approximately 2.5 million orphans, with 1.2 million of those children being orphaned due to the country’s AIDS epidemic. Due to economic hardships, lack of resources, and corruption in the government, Uganda is incapable of responding to the needs of these children.

Co-founders Mandy and Shay Holloway and Lacey LeCompte, along with co-executive director Jason Delatte started Refuge 127 Ministries– a hope refuge school located in the village of Kachomo, Uganda. Nearly a decade of caring started locally for Refuge 127 Ministries with these members of the Thibodaux-located House of Prayer Church, as an outreach to the Lafourche Parish Juvenile Justice Facility where they provided a weekly Bible study. That’s when they embraced the call for helping children around the world.

The organization says for the four years they helped with the juvenile facility that God trained and developed them to take on bigger work. Their vision for the school started when Mandy and Shay went on a mission trip to Kachomo in January 2012 to assist in helping build an orphanage with their friend Josh Wilson and Pastor John Wayabire. They brought their will to build schools and living quarters along with medical care, clothes, and food to the their fellow members of House of Prayer Church. In February of that year they officially became a non-profit organization.

Since its inception, Refuge 127, comprised now of 15-20 members, has completed six school houses with cement floors, doors, windows, and plastered walls, helping over 550 at-risk youth in and around the area of Kachomo. Various members of the organization visit the facilities at least once a year for a 12 to 14-day stay. Jason says one of their goals is to build a home for volunteers and members to help keep the cost of visiting down. Refuge 127 also provides food and has successfully installed two deep water wells, yet continues to reach further with hopes to add a sustainable food source through farming. Farming God’s Way, an organization that helps the poor in different parts of Africa by providing resources, tools, and training in farming, will work alongside Refuge 127 in this endeavor.

“Over here we get a lot of rain,” says Jason, “Over there it can go six months without rain. We can build in rows for farming, over there we will teach them to build holes for farming and use what is called God’s Blanket.”

Refuge 127 purchased two and a half acres of farmland around the orphanage but must first build a fence around the land to prevent theft. It is a poverty stricken area so people are desperate, Jason explains. He and the organization want to teach the orphanage and the surrounding area how to farm and build a business so they can acquire some income and be self-sufficient.

With each visit, Jason sees proof of the need for Refuge 127 to keep growing.

“They wear the clothes that are donated to them until they fall apart. They wear turtlenecks if it’s given to them and they have no winters over there,” Jason says, “They have never even seen water bottles. That’s like giving a kid over here a new drone for Christmas.”

Many children of the area must eat with their hands because they don’t have soap to clean utensils Jason explains. The organization provides medical help by dispensing de-worming medication, providing medical supplies and administering basic wound care.

Acquiring finances is currently the biggest obstacle for Refuge 127. The group holds three main local events throughout the year: Zumba Love, Race for Refuge 5k, and Tour of Homes. The latter was their main contributor until their first Race for Refuge 5k at Peltier Park in 2016.

At the Tour of Homes event, scheduled for December, people in the community get to tour five to six different decorated homes in various neighborhoods throughout Thibodaux. Jason says the event is designed to bring in the community by using local restaurants to cater, musicians to provide background music, and businesses to sponsor.

“These are the houses people see around the area and wonder what they look like inside,” Jason says, “It’s a great way to have fun and support a good cause.”

Expansion to other impoverished countries around the world is another goal Refuge 127’s leaders have set. Their answered call has led them to provide shelter, education, clothes, food, and water to orphans in a small village over 8,000 miles away. Everyone wants to be a hero by rescuing someone, Jason says, but anyone can be a hero by just serving and providing for someone in need.