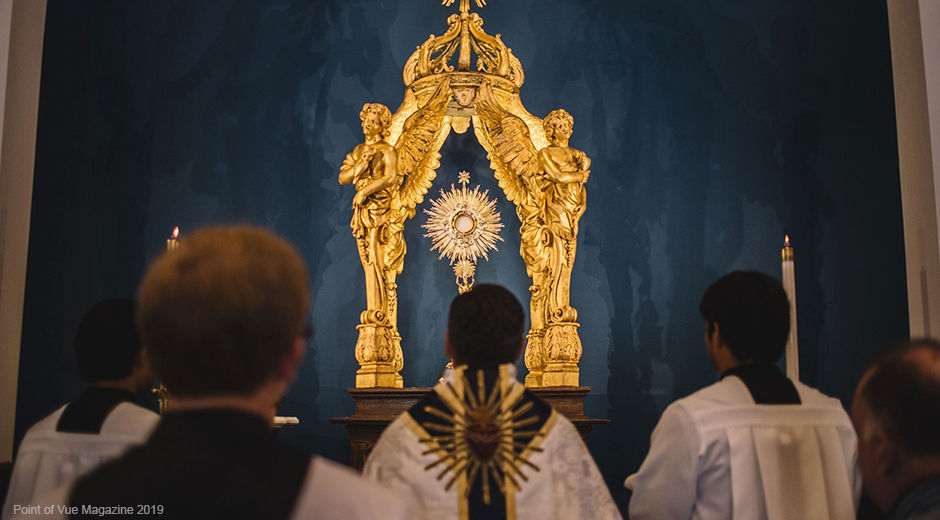 The Heart of the Community

On October 13, the Two Hearts Perpetual Adoration Chapel opened at St. Thomas Aquinas Catholic Church on the campus of Nicholls State University in Thibodaux. What began as a vision of Father Mitch Semar was brought to life through local contractors, builders, artists, parishioners and the much larger giving community.

In 2018, the Catholic Church experienced its share of scandal and shakedowns. As Father Mitch explained, the community at St. Thomas responded to the news through prayer, talking about the atrocious acts and doing what they had to do to move forward together as a people of God.

“We decided at that moment that God was calling us as a community to build a perpetual adoration chapel, a place where people can go 24 hours a day, seven days a week to see Jesus, to be with Jesus exposed as the blessed sacrament, to receive healing, mercy and protection,” recalls Father Mitch.

The community of St. Thomas Aquinas set out to raise the money needed to build the chapel, with a main fundraising focus placed on #iGiveCatholic Giving Day in 2018.

According to their website, the first-ever online giving day created to celebrate the Catholic faith, #iGiveCatholic Giving Day, inspires individuals to “Give Catholic” on #GivingTuesday, a global day of giving. The goal of the #iGiveCatholic Giving Day is to rally Catholic communities throughout the country in support of their organizations and ministries. This year, #iGiveCatholic Day is December 3. Within the Diocese of Houma-Thibodaux, there are 71 churches, schools or organizations registered, each with a different project they hope to fund. Some examples include school security cameras, a new roof, construction of a cry room for young families at a local church and new air conditioners. Visit igivecatholic.org for information on each organization.

During the 2018 fundraising period, $230,000 was raised for the Chapel in the 24-hour timeframe. This total was the third most money raised nationwide through #iGiveCatholic. With this money, the Chapel became a reality.

Throughout the building and planning process, Father Mitch truly felt the hand of God was at play. His original goal was to have the Chapel built and ready for students when they returned to campus in August. But torrential rains over the summer drastically impacted the building process. After sitting down with Lea Rutter and David Duplantis, Father Mitch inquired what the new opening date would possibly be.

“Lea just looked at me and said, ‘Let’s shoot for October 13’,” shares Father Mitch. “I was like, ‘Ok that’s fine.’ I realized later the date’s significance. That was the last day of the apparition of our Lady of Fatima, when the Blessed Mother appeared to the children and the miracle of the sun dance occurred.”

And so construction began. But of course, the hand of God moved again. The first wall on the chapel went up on May 13 – the first day of the apparition of Our Lady of Fatima. The entire chapel was built during the five months that the Blessed Mother appeared to the children of Fatima in 1917. But God’s symbolism doesn’t end there. The church canonized Cardinal John Newman, the founder of the Newman Centers and patron saint of college campuses, on October 13, 1948.

Since it’s opening date, adorners have been in the chapel 24 hours a day, seven days a week. Not only parishioners, but also the student body of Nicholls have made a point to stop by and spend time with Jesus, stopping by between classes.

The beauty of the Two Hearts Adoration Chapel is truly something that one must behold in person. Every piece of art that adorns the chapel is filled with symbolism and deep meaning. Father Mitch walked parishioners through the meaning behind the art selected during his homily on October 13.

The painting of St. Joseph, depicted in his workshop, is titled “St. Joseph, the Custodian of the Two Hearts.” There is also a painting of St. John celebrating the Holy Mass. To one side of the chapel is a six-foot statue of Mary, the Blessed Mother that originated in Spain. Next to her is an oil painting of Jesus, also from Spain, depicting his heart on fire, burning with love for us.

There also is an image of Our Lady of Guadalupe that Father Mitch got in Mexico City during a mission trip with students featured on your immediate left when you enter the chapel. On your right, you see an image of the Divine Mercy of Saint Faustina.

The stained windows came from the attic of a friend of Father Mitch’s, originating from Germany during the 1800s. Inside the chapel, you will also find a beautiful high ceiling, covered with cedar wood.

Centered on the main wall is a beautiful three-foot mosaic created by parishioner Dr. Anne Boudreaux. It features Mary as the Arc of the Covenant. In her womb, she holds Jesus as the Holy Eucharist. Mary’s beauty and glory come from her son, Jesus.

Finally we come to the monstrance, the beautiful piece that holds the consecrated Host, which is ancient and whose history is unknown. Four golden angels that came from Spain surround it. The two angels in the front are each holding a heart.

“I didn’t come to St. Thomas expecting to build an adoration chapel,” shares Father Mitch. “That was not in my plans, but it was in the plans of God. And that vision came true because of the generosity of our parishioners. And I know now that adoration chapel won’t be empty. It’s going to be you and me filling it up with Holy hands lifted up to God.” 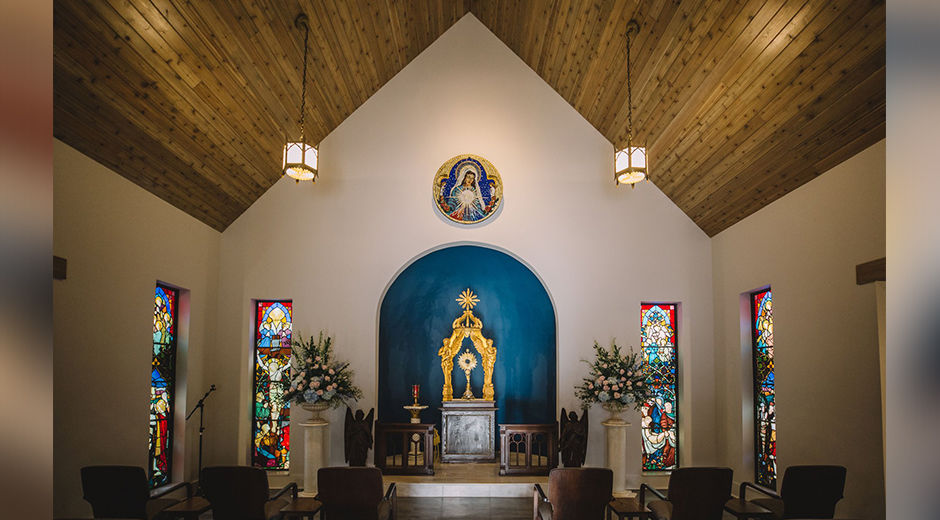 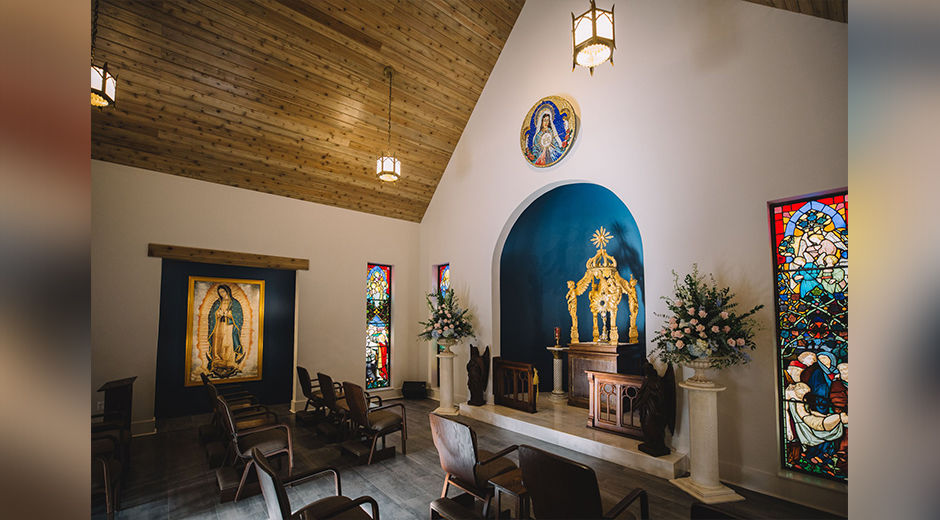 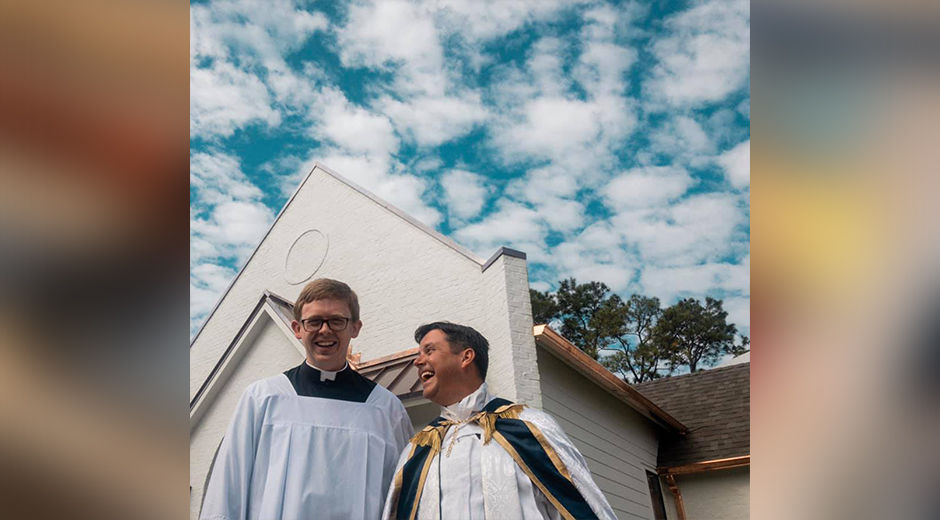