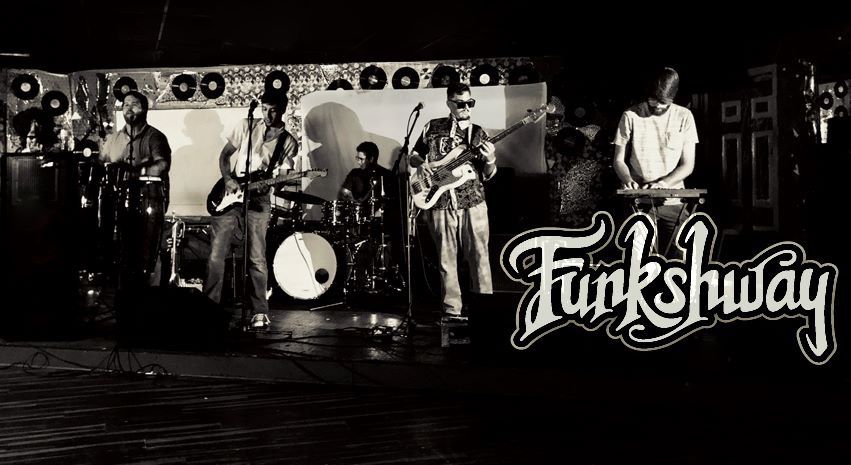 HOW WOULD YOU DESCRIBE YOUR MUSIC?

The band is still young in being formed. Just like any relationship, I believe we are still in our honeymoon phase in terms of we all have a lot of creative ideas that we would like to try out and not corner ourselves too early into a hole with our music. That being said, we try to create songs with great vibes and beats that make you wanna groove. They also have to have a funky punch to them, like when that dirty hamper of clothes hits ya nostrils. I mean funk is half of our name, so we try to hold ourselves accountable to give it to ya.

WHAT ARE SOME OF YOUR FAVORITE VENUES TO PLAY?

DESCRIBE THE MUSIC SCENE IN THE BAYOU REGION.

Not to be cliché, but it is really a melting pot. There is literally every type of music you could want out there, even some that will leave you guessing what you witnessed. You wanna hear a great cover band, indie music, rap, swamp pop, rock, edm, punk, country, surf rock or shredding metal that will make you wanna yell at children? It’s all out there. The thing is, you have to seek it out and support it because not all of it will be equally or fairly represented. Take a chance on a cover charge now and then. You might be surprised by what you hear. There’s bucket loads of talent down these bayous, and a ton of it never leaves the bedroom. I’m positive that there are many people that can run circles around me musically. Playing music live might not be their thing, or they haven’t found the right people to surround themselves with musically. Whatever the case, I hope they never lose that drive that keeps them playing.

HOW DOES IT FEEL TO BE CHOSEN TO PLAY AT DOWNTOWN ON THE BAYOU?

We are stoked to be one of the chosen bands to play Downtown on the Bayou. It gives us a sense of fulfillment to know that others enjoy what we do enough to want to invite us to an event to perform. We absolutely appreciate the opportunity they have given us to funk it up.

HAVE YOU PLAYED AT ANY OTHER FESTIVALS?

Nope, this is a first for us. It’s a little nerve racking to put yourself out there naked, so to speak, with your music, not knowing what the reaction will be from the people you are performing to, but we’ll show up and do our thing like we always do. Will we survive? Will we blow minds? Will we flop and get laughed out of town? Tune in this week and find out for yourself. •