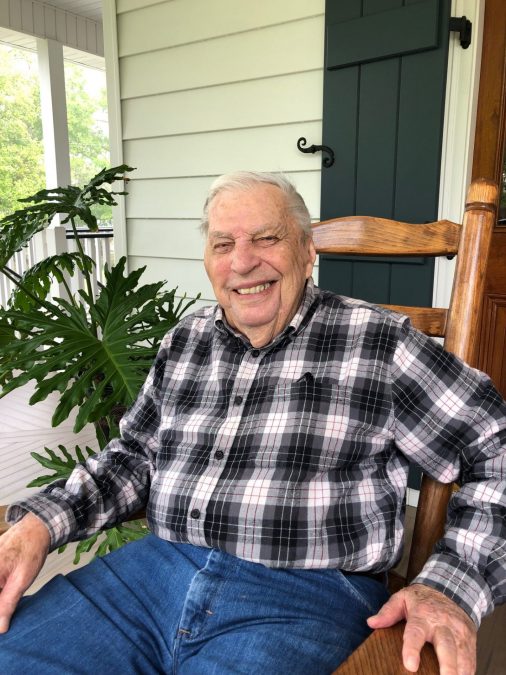 The family of Edward Paul “Bubby “Lyons announces with great sorrow the passing of “Bubby” Lyons, 91. Mr. Lyons gracefully passed away on Friday May 14, 2021 in Mandeville, LA, his home since 1995.

“Bubby” Lyons, a member of the Louisiana Political Hall of Fame, was the only person to have served as Mayor of two different Louisiana cities, Houma and Mandeville, Louisiana. Serving in both parish and city government afforded Bubby a unique perspective. He was a faithful public servant. He governed with the well-being of his constituents in mind and heart.

Amid the oil industry downturn, Lyons led the new model of consolidated government for Terrebonne Parish. He was not afraid to lead from the front, making tough decisions during the oil industry’s downturn in the 1980s. It has been stated that while Bubby stood toe-to-toe with local and state leaders, he had no peers when it came to how he handled people with calm dignity, courtesy, and politeness. His family attributed his skills in diplomacy to lessons learned from his mother and grandmother, Laura Guidry Lyons.

In 2009, at 80, Bubby provided stable, decisive, and vigorous leadership to the City of Mandeville as interim Mayor. In 1965, the Lyons family began to visit in Mandeville, eventually establishing a retirement residence there in 1995. They became active in civic and faith groups in retirement. They served on the Board of Directors for Holy Redeemer Seminary and High School in Lacombe. Lyons enjoyed a renaissance working alongside his wife, Joan, owner of Bayouland Tours. For the first time, their roles were switched; Joan provided the business acumen, operating a thriving hospitality and travel business. Bubby entertained travelers with stories and his relationship with Joan.

Lyons attended Louisiana State University in Baton Rouge for one year before he enlisted in New Orleans on September 24, 1946. The 1945 graduate of Terrebonne High School, like many of the young men of his generation, saw military service as a way of supporting the military efforts of the United States and securing their own future. He enlisted as a P.F.C. in the United States Regular Army and was stationed at Fort Knox, Kentucky, for Basic. Later, he was stationed at Fort Sheridan near Chicago, Illinois, and Fort Lawton near Seattle, Washington. He mustered out as a Corporal.

After returning from military service, Lyons worked in oilfield and oilfield support businesses, including working on his father’s boat, Lillie Marie, delivering groceries to the five Texas Company Camps in Terrebonne inland bays. He also worked for Texaco and Placid before he returned to college. However, before he could complete college, he fell in love with Joan Ann Ortego, who became his wife in 1951.

Bubby began his public service career in 1967, representing Ward 3 on the Terrebonne Parish Police Jury. Following his re-election in 1971, he was elected President of the Police Jury and served in it as a full- time position, the first in 115 years to commit fully to a good government model. He streamlined services, created department head positions, and established relationships with other parishes during that time. His leadership extended thru consolidation to the development of the Louisiana Energy Power Authority, where he served as Chairman. He also represented Terrebonne Parish on the Board of Directors for the Louisiana Municipal Association. Bubby was elected Mayor of Houma in 1978.

In addition to his public service career, Bubby was a successful businessman. From his youth, assisting his father with driving and delivering bread, to oil field work with Texaco and Placid, to part-ownership of Duplantis Truck Lines, Inc., he demonstrated a solid ethical spirit.

Later in the 1970s, he was co-owner of Quality Shipyards, Inc., and International Motor Co. He later became a part-owner in Benton Casing Service. He also served as a member of the Board of Directors of First National Bank & Trust and Fidelity Federal Life Insurance Company.

While in their 60’s Bubby and his wife, Joan, turned a lifelong love of travel into a family business with the establishment of Bayouland Tours Inc. Joan starting and running the bus tour business, and Bubby alongside as host and entertainer. He was beloved for his jokes and leading sing-alongs with the fellow travelers to their delight.

The son of the late Edward Robert Lyons and Lillie Marie Duplantis Lyons, Lyons had deep roots in Terrebonne Parish. His paternal great-grandfather, L.C.P. Lyons, arrived in Terrebonne Parish in 1851. L.C.P. enlisted in the Confederate Army on March 21, 1862. He was posted to Company H, Grivot Guards Company B, Bisland, the 26th Regiment. He served alongside other Terrebonne Parish residents. Duncan Cage, LTC, whom Lucius had worked for on Woodlawn Plantation, served as Field Officer.

In addition to public service, Lyons lived out his Roman Catholic faith, sensing God’s presence and power in his life. He served on the Knights of Columbus Council for Holy Rosary and Annunziata in Houma. He was a Fourth Degree Knight of Columbus. The fourth principle or degree, “Patriotism,” commits members to preserve the Church, the Order, and the nation.

Bubby Lyons’s untiring efforts and devotion to church, community, and family garnered him the Most Useful Citizen of 1975 presented by the Houma Courier and Terrebonne Press.

A wake will be held Thursday evening at Chauvin Funeral Home at 5899 Hwy 311, Houma, LA. Visitation for family will be from 4:00 p.m. to 5:00 p.m. Public visitation will begin at 5:00 p.m. A Mass of Christian Burial will be held at St. Francis de Sales Co-Cathedral, Houma LA on Friday, May 21, 2021. Eulogies will be offered beginning at 9:30 a.m. and services will begin promptly at 10:00 a.m. Due to Covid -19 restrictions, there will be no visitation prior to the services at the Co-Cathedral. Interment will be conducted at Holy Rosary Catholic Church Cemetery at 8954 East Main Street in Houma, LA. A memorial mass will be held at Our Lady of the Lake Catholic Church, 312 Lafitte Street, Mandeville, LA on Monday, May 24, 2021. Visitation will begin at 10:30 a.m. with Mass following at noon. Chauvin Funeral Home is in charge of arrangements.