Four floodgates to be completed by 2012 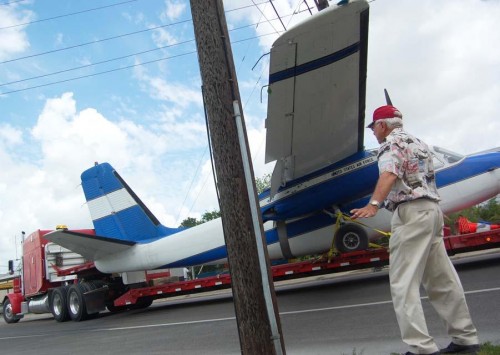 For residents along Barrow Street in Houma, sights were unusual last week, as a plane made its way down the narrow corridor lined with buildings and telephone poles.

“We see some crazy things. But it’s not everyday you see a plane come down the road,” said Toni Faye, a resident who lives nearby.

However, the aircraft – which was being transported by truck – wasn’t your typical puddle-hopper. President Dwight Eisenhower used the small, twin-engine plane in the 1950s and 1960s, mostly for travel to his small farm in Gettysburg, Pa., and Camp David.

Faye was among the many spectators who stood on their doorsteps to witness the plane’s journey to the Regional Military History Museum in Houma. It was originally stored at the Louisiana State Museum in Patterson as part of the Wedell-Williams Memorial Aviation Foundation’s collection. But with a recent shift in focus, the foundation was unable to display the plane.

“Because we couldn’t put it on display, it was just hanging in a hanger all by itself,” explained Tom Palmer, who sits on the foundation’s board of directors.

After a recent trip to Patterson, officials from Houma’s military museum were able to strike a deal and get the unique piece of history for themselves.

The Air Force U4-B, a military version of the popular Aero Commander 680, was transported by barge from Patterson to Houma. It was then lifted by crane and placed onto a truck by Terrebonne Wireline Services, who donated their services in order to make sure the plane arrived safely.

Multiple companies had a hand in the project, but not a single one charged the museum for their services, said C.J. Christ, president of the military museum and chairman of the board.

“I think people have a certain respect for the military and for its history. They support this kind of endeavor.”

The short trek took more than two hours to complete, as the plane’s wingspan of more than 40 feet provided for tedious maneuvering. But to those involved, the wait was worth it.

And for Christ, the new display has special meaning, as he was a B-29 pilot during the Korean Conflict.

With the plane’s rich history, it’s sure to be a hit.

“I think it’s a boon. It will be the center of their museum. It brings a certain flavor to their museum,” said Palmer.

The small white plane could also lead to bigger and better things for the growing hometown establishment.

Christ said the new item is likely to expose the local setup to state and national audiences. “We now have an icon of a national hero,” he explained. “Now, visitors could come from all over.”

Air Force One will be on display in the next few weeks, along with logbooks detailing the plane’s numerous trips.

Although the aircraft is officially on loan from its Patterson State Museum location for three years, that likely will be renewed, keeping the aircraft in Houma longer, according to Palmer.

C.J. Christ, president of Houma’s Regional Military Museum, helps guide Dwight Eisenhower’s Air Force One down Barrow Street. The aircraft will be on display at the museum in the coming weeks. * Photo by MICHAEL DAVIS