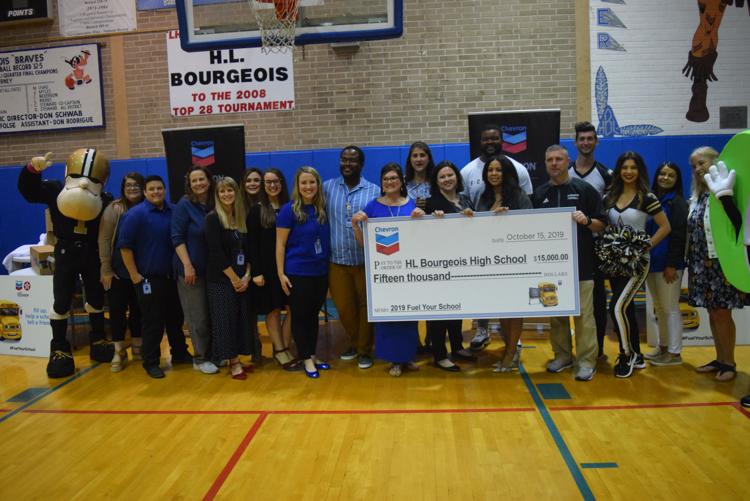 It was a party on Tuesday morning at H.L. Bourgeois, and those in attendance had every reason to be excited.

In between musical notes by the school’s band and performances by the dance team and cheer squads, it was announced that Chevron had donated $15,000 to the school — $1,000 each to 15, separate classrooms, as part of its ’15 on 15’ event and Fuel Your School program.

At the ceremony, Chevron also announced that the teachers being awarded the donations would also receive an additional $100. The proceeds will go to provide top-notch supplies to enhance hands-on learning at the school. Included in each gift package were things like iPads, Chromebooks and other learning items needed for STEM-based learning.

New Orleans Saints’ defensive lineman Taylor Stallworth was on hand to unveil the gift packages, and officials with the school and school system said they were thankful to be the recipients.

“We’re so thankful to Chevron and everyone involved in making this day a reality,” H.L. Bourgeois principal Matthew Hodson said. “We’re truly grateful.”

“It’s a wonderful gift and we will put it all to great use — to help the wonderful students at this school,” Terrebonne Parish Schools Superintendent Philip Martin said. “Thank you so much. We are so appreciative.”

The gifts were unveiled at an hour-long pep rally, during which the Braves’ students, band, dance team and cheer squad all strutted their stuff.

With loud music blaring and students singing and dancing, the vibe was right, and people were passing a good time.

“You guys truly are the best band in the land,” Martin said to the band, drawing a roar of applause from the crowd.

Sir Saint was in attendance in the event, as well as Stallworth, who said he was honored to be in attendance at a school with so much spirit.

Stallworth is a young player on the Saints’ defense. He’s appeared in a couple games this season.

The packages were covered up in the school’s gym, sitting on tables. When Stallworth looked under the cover, before lifting it, he smiled and said, ‘Man, look at all this!”

“It’s a tremendous blessing to see,” he said of the event. “Who doesn’t thrive on so much positivity and positive energy?”

Funding for the ’15 on 15’ event comes from Chevron’s Fuel Your School program, which will provide an additional $375,000 to eligible teachers and classroom projects at public schools across southeast Louisiana.

In partnership with Chevron, the College Football Playoff Foundation has committed to match each donation up to $325,000. Teachers in select Louisiana parishes can post their project on www.DonorsChoose.org to be eligible for part of the funding.

Submissions will be accepted throughout October. Visit www.fuelyourschool.com for more details.

“Our teachers and students deserve this,” Hodson said. “We will put it all to good use.”

Chevron also announced at the event that they’ve donated $51,000 to Terrebonne Foundation for Academic Excellence (TFAE) for the launch of a satellite dual enrollment program.

The program will allowed Terrebonne public school students to earn collegiate credit at the two colleges while still enrolled in high school — all at no cost to the student.

Currently, similar programs are offered, but they involve students traveling to Nicholls or Fletcher. Now, they’ll be able to enroll from their high school campus, thanks in part to the funding, which will assist in purchasing technology for the program.

Chevron made the donation based off a grant proposal from TFAE. The technology will include a large TV to be used as a screen projector, laptops for teacher/instructor at the high school to project the course and 30 Chromebooks for students to utilize.

This will be available at all four Terrebonne Parish public high schools.

The program is set to become available in Spring 2020.

“I can’t say enough about Chevron’s investment in our local education, particularly in STEM programs and courses,” said Katie Portier, Executive Director of TFAE. “I believe this program will allow more students the opportunity to explore college courses and reap the benefits of hard work through dual enrollment. We are incredibly thankful to TPSD, Nicholls and Fletcher for their willingness to partner with us on this and offer an alternative style of learning to students.”