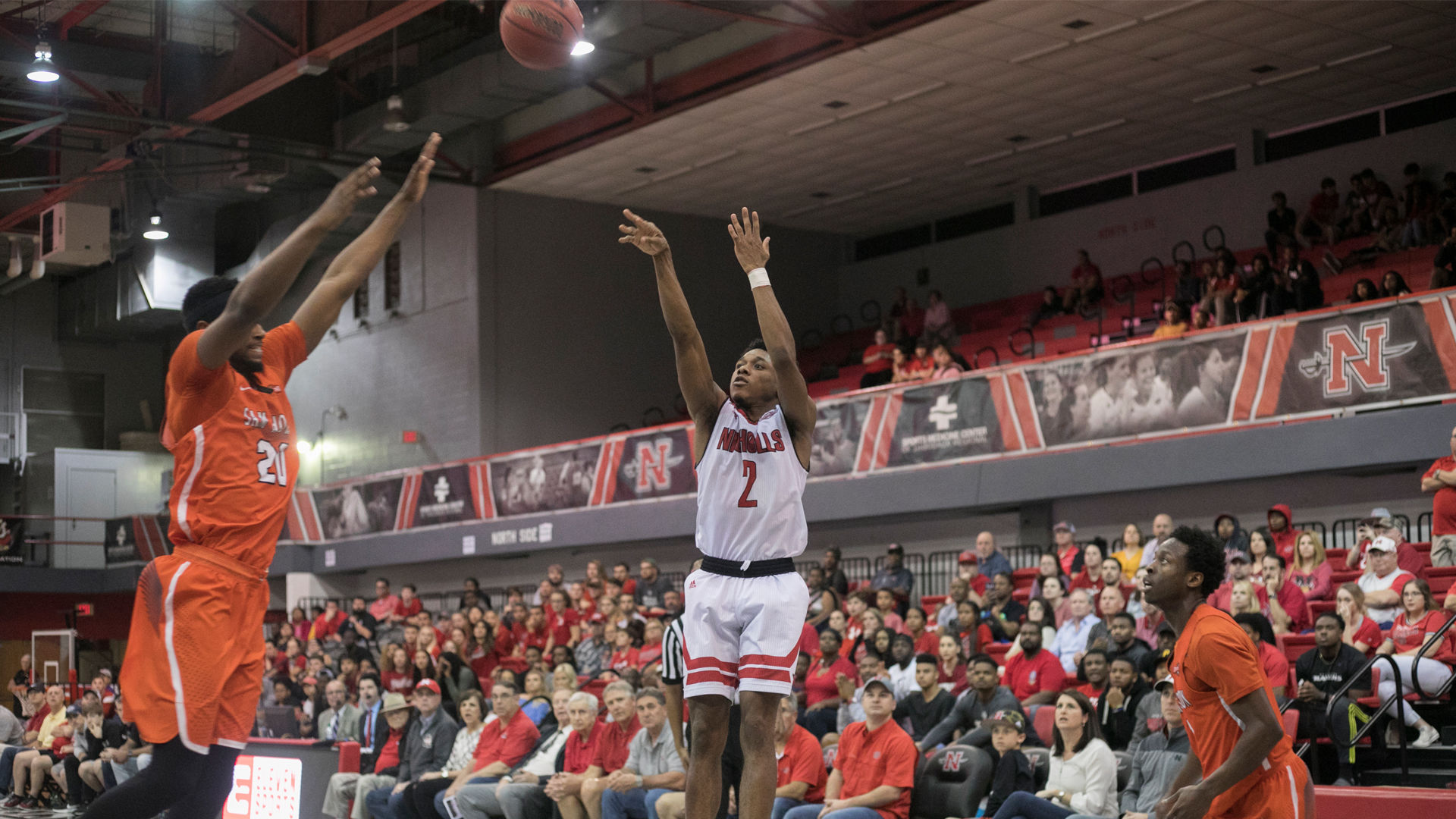 Colonels get big win over UNO

The Colonels pounced on UNO 78-64 on Saturday night – improving to 14-2 in Southland play, maintaining a one-game lead over Southeastern Louisiana for the regular season crown.

The Privateers challenged Nicholls throughout the game and the score was tied at 48 with 10 minutes to play.

But Nicholls finished strong, ending on a huge run, which pushed the game to its final margin, sending out a large senior class in style on Senior Night.

“We made some adjustments on how we were guarding some of their stuff,” Nicholls coach Richie Riley said. “They are difficult to guard. They screen extremely well and are disciplined in their shot selection, so it makes it tough. They make you guard for most of the shot clock. We had to adjust how we were defending them and our guys came out and executed pretty well.”

The Colonels won the game in the final 10 minutes.

UNO played tough early, leading 18-14 midway through the first half, thanks to an 11-0 spurt on a six-minute scoring drought for the Colonels.

But it didn’t last.

Nicholls ended the first half strong, regaining the lead at the 3-minute mark on free throws from Tevon Saddler, then pulling ahead 36-32 at the final whistle – a 24-12 run over the final 10 minutes before halftime.

Nicholls was a mixed bag offensively in the first half with five players scoring five or more points, including Saddler, who had 8.

In the second half, UNO refused to wilt.

The Privateers didn’t wilt. They led twice in the early stages of the second half, then tied the game at 48 with 10:46 to play on a couple free throws from Troy Green.

But the Colonels dominated the rest of the game. The Colonels went on a 14-3 run over four-minutes to take a 62-51 lead with 6:42 to go – a run capped by a 3-pointer from Jahvaughn Powell, who had a game-high 22 points with eight steals.

UNO tried to battle back, but never got close.

Nicholls stretched its lead to 72-55 with 3 minutes to play before surrendering ground a little bit later in the game, which sent the game to its final margin.

Riley said his defense was the credit for the late-game spark and turnaround.

“The thing about our team – once we can string some stops together, it allows us to get out in transition and get playing downhill. That’s when we can kind of separate and we were luckily able to do that.”

With the win, Nicholls maintained its first-place pace in the quest to win the regular season Southland Conference crown.

The Colonels’ magic number is two.

Any combination of Nicholls wins or Southeastern losses that adds up to two would clinch the title for Nicholls, earning them the No. 1 seed at next week’s Southland Conference Tournament.

Nicholls has two games next week – both on the road.

The Colonels will take on Northwestern State on Wednesday, then Southeastern Louisiana on Saturday.

The game with the Demons shouldn’t be difficult – at least on paper.

Northwestern State is 4-23 on the season and 1-15 in Southland Conference play. The Colonels beat the Demons 87-46 earlier this season.

On Saturday, the stakes will be higher. Nicholls will travel and face Southeastern – a game which may decide the regular season Southland Conference Title.

The Lions beat Nicholls 67-63 in Thibodaux earlier this season – the last game the Colonels lost this season.

But, of course, there’s also a slight chance that Saturday’s game will not have any implications at all.

The Lions will travel and face UNO on Wednesday and if they falter and Nicholls beats the Demons, it’s possible that the Southland Title chase could be sewn up before the game takes place.

The men get all the headlines, but the Nicholls State University women’s basketball team is rolling, too.

The Colonels crushed UNO 72-48 on Saturday afternoon – the sixth win in seven games for a Nicholls team that’s quietly crept up to 9-7 in the Southland standings.

Nicholls controlled the Privateers from start to finish, rolling out to a 20-9 lead at the end of the first quarter, then a 34-23 lead at halftime.

Junior Cassidy Barrios was huge in the win, scoring 20 points with 8 rebounds, 5 assists, 3 blocks and 4 steals, while playing 38 minutes.

Guard Tykeria Williams was also huge, pitching in 19 points in the win.

But more impressive than the offense was Nicholls’ defense, which limited UNO to just 32 percent shooting in the game, while forcing 19 turnovers.

The Colonels did an impressive job defending All-Southland guard and Houma native Randi Brown, limiting her to just 5-of-16 shooting and 18 points, forcing her into 6 turnovers in the win.

Like the men, the Nicholls’ women will also take on Northwestern State and Southeastern this weekend.

Two wins would help the Colonels improve their positioning for the Southland Tournament.