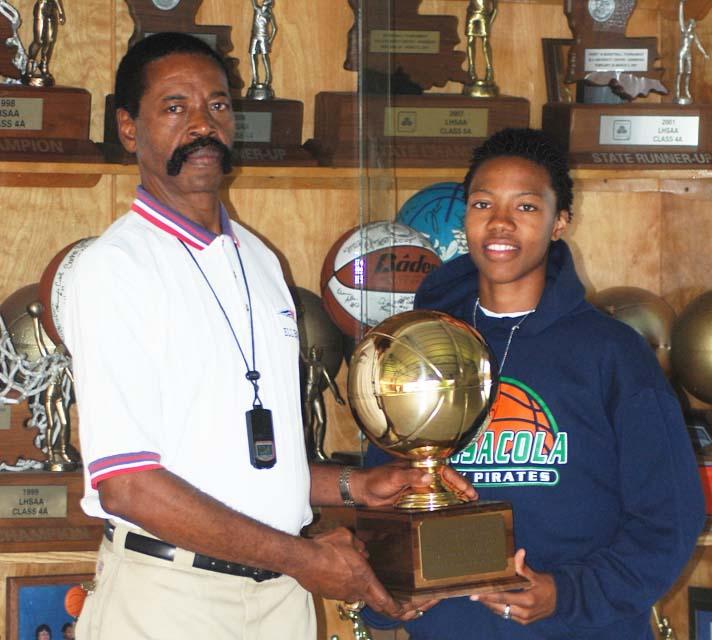 Two and a half years ago, Kenneth Dixon wasn’t sure if he’d ever coach another basketball game.

Tomorrow, he will be back at the LHSAA Top 28, trying to win his fifth state championship ring.

The Ellender Lady Patriots advanced to the Class 4A State Semifinals on Thursday night, scoring a hard-fought home victory in the quarterfinals over Neville – a game that was close throughout, ending in a 73-67 final score.

For Dixon, the victory marks his ninth trip to the Top 28 and his first in nine years. The legendary local coach briefly retired after the 2013-14 season, sat out for one year to tend to his ailing mother, then returned to Ellender for the 2015-16 season after growing lonesome of the game.

He said he’s excited for his young team, which plays several sophomores and juniors.

The No. 3 Lady Patriots will take on No. 2 DeRidder on Thursday in the Semifinals. Tip-off is set for 1:15 p.m. at the University Center on the campus of Southeastern Louisiana University. The winner of the Ellender/DeRidder game will take on the winner between Northside and Salmen in the Class 4A State Title Game.

“This has been a good group. It’s been a blessing to coach them,” Dixon said earlier this season. “It’s been a learning process. I think at the beginning of the season, our energy and our effort was lacking a little bit. But I think somewhere along the way, the kids started to have a little bit of that buy-in, and I think they realized that when they play well, they have a chance to be pretty good – up there with almost anyone they will play.”

On Thursday night, the Lady Patriots needed an excellent effort to get past a pesky Neville team that came to play.

The Lady Tigers led 20-17 after the first quarter, sinking several outside shots to spark the early offensive surge and quiet Ellender’s massive crowd.

But in the second quarter, Ellender’s defense started to take over the game.

The Lady Patriots shifted to a tight, physical man-to-man look, which bothered Neville, while also creating opportunities for Ellender in transition.

The Lady Patriots dominated the final three minutes of the quarter, which allowed them to take a 37-32 lead into halftime – an advantage they never relinquished in the second half.

But the berth to Hammond didn’t come without some struggles.

The Lady Tigers went on a 12-5 run late in the game, which forced Ellender to make some clutch free throws.

But they did, solidifying the team’s place in the Top 28.

But it won’t be easy.

Against DeRidder, Ellender will be taking on one of the best teams in Louisiana – a team that enters the game with 14-straight victories.

Common opponents also show that the game will be close.

DeRidder beat South Terrebonne 41-28 in the second round of the playoffs.

Ellender beat the Lady Gators twice during the regular season – once by 11 points and the once by 15. The average outcome of those games is 13 points – the exact margin of DeRidder’s victory over South Terrebonne.

The Houma Times sports staff will be in Hammond throughout the Top 28. Check HoumaTimes.com for updates on the Lady Patriots’ run.

ELSEWHERE IN THE AREA

Ellender won’t be the only local team to play at the Top 28.

The No. 1 Houma Christian Warriors punched a ticket to Hammond on Thursday, scoring a 72-49 victory over Ascension Christian in a game played at Vandebilt Catholic High School to accommodate the large crowds.

The Christian Warriors’ speed and quickness was a factor in the game.

Houma Christian pressed its opponent throughout the game, roaring out to a double-digit lead after the first quarter, while surrendering just five points.

In the second quarter, Ascension Christian played better, but the Christian Warriors retained their lead, taking a 35-23 advantage into halftime.

Throughout the game, Houma Christin got waves of scoring, led by 21 points from Alicia Johnson, but Dionjhae Thomas, Breanna Harding, Xariel Washington and Dalesia Williams also filled up the stat sheet for the Christian Warriors, which are going to the Top 28 for the first time in school history.

In the third quarter, Houma Christian dominated, going on a 23-12 surge to take a 23-point lead – an advantage that never got much closer in the fourth quarter.

With the victory, Houma Christian advanced to Hammond to take on No. 4 Southern Lab – a team that’s arguably the hottest in Louisiana in Division IV.

Southern Lab won its first playoff game by 49 points, then beat St. Mary’s by 26 points in the quarterfinals, which set the stage for a matchup between state powers.

The Christian Warriors played Southern Lab on Tuesday morning at 11:30 a.m., and no score was available at press-time on Monday afternoon.

The winner of that game faces the winner between No. 2 Vermilion Catholic and No. 3 Lafayette Christina on Friday at 4 p.m.