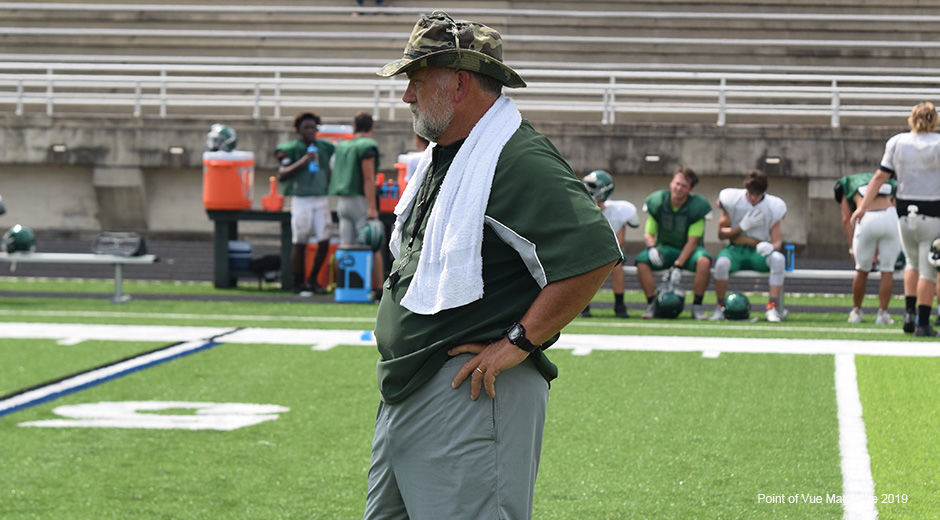 There’s something happening at South Terrebonne High School right now that’s not happening anywhere else in the state.

Heck, and there’s a pretty good chance it won’t ever happen again anywhere else in the future, either.

Gators football coach Richard Curlin is entering his 36th season in Bourg — his 30th season as the team’s head coach. Around Coach Curlin are several guys who have been with him for more than a decade-plus, guys like Francis Labat, Stephen Barba Sr. and Archie Adams.

Coach Curlin said the longevity and loyalty within his staff makes him feel good, adding that it’s easier to show up to work each day when you’re working with people you trust.

But Coach Curlin said that what makes it even better is that there’s a “new guard” forming of mostly former Gators’ players — guys he and the ol’ staff coached back in the day.

Those new guys like Justin Lirette, Stephen Barba Jr., Caleb White and others are studying the old regime and are even bringing a little new flavor to the program — a mix of young and old that Coach Curlin said makes him proud.

“We rely on each other,” Coach Curlin said when asked about the longevity on his staff. “Everyone understands their role. You don’t have to write everything out all of the time. And for us, damn near the whole staff are former players now. If you’ve been in the system, you know the system and how it works and I think that makes it easier to teach it to the players. For us, it works.”

Doing it this way isn’t an accident. It’s something Coach Curlin said is by

Peoples’ hair was bigger then, the price of gas was cheaper and a young Richard Curlin was an assistant coach with the Gators.

After several seasons as an assistant, Coach Curlin got his crack at being the head coach in 1989 — his first season with the team.

Coach Curlin said in the early days of his career, hiring coaches to a school was pretty easy.

“If a teaching job was open and the applicant was a coach, in those days, that person was going to get the job,” Coach Curlin said.

But somewhere between the time that he became an assistant coach and a head coach, that changed and principals started to prioritize classroom ability, which made “career coaches” harder to find.

To fight that, Coach Curlin said he knew he had to build his program with Gators — guys who have a passion for the program and who want the team and its players to succeed.

With Francis and Stephen Sr., by his side practically since day one, the Gators have slowly collected coaching talent. Archie started as a “young” coach, but has now been with the team for several seasons.

Coach Curlin said Archie has graduated and is now one of “the old guys.”

That core has been together for countless seasons now and has won district titles, playoff games and has enjoyed a tremendous amount of success.

Also on the staff now are the newer guys, who also have a passion for the program, because they played within it.

This past summer, Coach Curlin said several members of his staff took time to help players work out and stay in shape. That buy-in, Coach Curlin believes, is because of the love for the Gators’ program.

“We were fortunate to have guys here who wanted to come back,” Coach Curlin said. “And we knew they were good, solid people. … And I think we have an extremely hard working staff right now.”

The older coach said coaching his son was fun, but he regrets that he missed being able to be a dad.

Stephen Jr. was a remarkable player who went on to play two sports at the collegiate level.

“I missed things, not watching from the stands,” Stephen Sr. said. “I didn’t get to cheer and scream like other dads do. It was always on to the next play.”

Both of the Barbas coach offense for the Gators.

Stephen Sr. said he loves coaching with his son. He said the two meet and talk football all of the time.

“That’s a lot of fun,” Stephen Sr. said. “I enjoy working with him. We sit down and talk all of the time. We go over plays and different things. I take so much pride in being about to share that time with him.”

The game of football has changed since the 1980s when Coach Curlin and the “old guard” started leading the Gators’ program, and South Terrebonne, like everyone else, is not immune to those changes.

Coach Curlin said having those younger coaches in house helps massage that process and keep the team modern.

The system is the system in Bourg and it always will be.

The Gators run the Wing-T and will always be a run-heavy offense.

But Stephen Jr. said this summer that the team will throw it more than in years past, joking that “they’re finally listening to me.”

At a recent Friday practice, South Terrebonne spent the first 30-45 minutes of drills on throwing the football out of their Wing-T look.

Both Barbas coached aggressively during the drills. Coach Curlin took pride in the successes of the team.

The test of time

Being a CEO-style head coach wasn’t always Coach Curlin’s way to do it.

Coach Curlin said his early coaching days were long because he felt like he had to do everything on his own.

“Lots of nights where I’d be here until 11 p.m., or sleeping right here,” Coach Curlin said pointing to his office.

With the right people in house, Coach Curlin said he trusts his guys and that’s lessened his role, which, he believes, has allowed him to be around as long as he has.

Coach Curlin shrugs away from talk that he’s some wizard because he’s been around 30 years. He said our area is blessed with a plethora of quality coaches.

“The only thing that makes me different is that I’ve been around such a long time,” he said with a laugh.

So, for how much longer?

Coach Curlin said he feels good physically and believes he could coach for “another decade”, if that was the only thing he had to do.

Where most football coaches in the state teach just a handful of classes a day, Coach Curlin is actually a 6-period a day Civics teacher.

He said if anything flushes him out of the job, it will be the classroom work and not his work on the field.

“I have two teams. I have my team of about 200 students who I teach and all the papers I have to grade and then, the team of 100 players over here that I have to worry about,” Coach Curlin said.

“If it’s anything that gets me, it’ll be the teaching.”

When pressed for a timetable, Coach Curlin said he honestly doesn’t know, adding that he’s just enjoying each moment while it’s here.