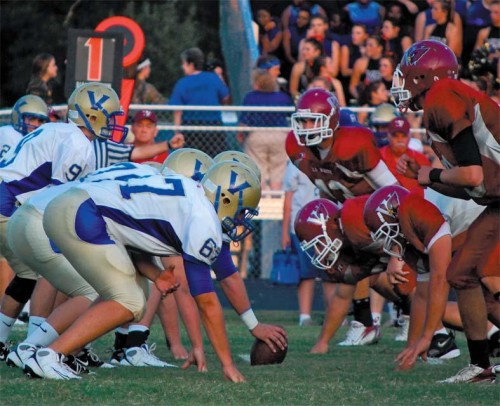 A cardinal versus a terrier? In nature, the two rarely cross paths and, if they did, the bird would likely be the dog’s dinner.

However, in high school football, when the two take the field, it becomes a fight to the death, symbolically of course, as one of the biggest rivalries in the Tri-parish area is played out for devoted students, faculty and alumni of the two catholic schools.

The two teams have played every year except twice, once in 1970 and last year after hurricanes Gustav and Ike forced the game to be cancelled. It is unknown by either school why the game was not played in 1970.

On Friday night, the two teams returned to the field and renewed the rivalry that has meant so much to the alumni of the two schools and the surrounding communities.

With Friday’s win, the Terriers came one step closer to evening the series record.

E.D. White Athletic Director Preston LeJeune knows the rivalry first hand. From 1978 to 1999 and again in 2003, Lejeune paced the sidelines as the Cardinals head football coach, where he built a 17-6 overall record against the Terriers.

During his time at the school, Lejeune said he hasn’t seen the students, faculty and athletes get as riled up for a game as they do against the Terriers.

But the series isn’t just about wins and losses.

It’s become something for the two schools to look forward to every year and is arguably the biggest game outside of their district foes.

“When I was coaching it was a really big game,” the former Cardinal coach said. “The kids get fired up whenever we mention Vandebilt. It was a little low-key last week heading into the game, but on Friday when we had the pep rally things really came alive. This has always been a big game for us.”

Dupont was a member of E.D. White’s state championship team in 1968 and 1969 where he played quarterback.

Dupont said while it’s always fun, once the ball is kicked off it’s just another game.

“I was involved in the rivalry in some way as a player, teacher or coach for 40 something years,” he said. “It’s nothing new to me. No matter who we are playing, we go out with the same goal. It was a great win.”

On the opposite sideline, Cardinals head coach Kyle Lasseigne said it’s a game his team looks forward to every year and will continue to do so, despite their shortcomings Friday night.

Despite graduating from the Houma school, the younger Keife considers himself a member of the Cardinal family after being a coach at the school for nearly a decade.

In fact the elder Keife understands and respects his son’s loyalty despite being a Vandebilt grad.

“He doesn’t see himself as a Terrier anymore,” David Keife said. “He knows where his bread is buttered. His wife is an E.D. White graduate so his loyalty is there and that’s okay. We visited each other before the game and compared game notes after the game.”

“But basketball, he treats that thing like it’s the national championship game,” he jokingly added.

Jonathan Keife said he has a little more fun during basketball season.

“I know my parents are E.D. White fans during basketball season,” he said.

“I think they would prefer that when we play Vandy in basketball that the game would end in a tie. But, I would like to hope that they are pulling for the Cardinals, even if it is secretly.”

Even though the Terriers earned the bragging rights for another season with their third straight win, Friday’s standing room only crowd was proof that the two schools’ battle is one of the classic rivalries in the bayou region.

“It’s a great rivalry,” Vandebilt Athletic Director Kathy Luke said. “It’s a long-standing tradition to the area and its usually always a good game. It’s exciting for everyone. This is what high school football is all about.”

The Vandebilt Terriers and E.D. White Cardinals renewed their rivalry for the first time in two years. The game was cancelled last season following hurricanes Gustav and Ike. * Photo by KYLE CARRIER