New faces ready to make their mark at Patterson 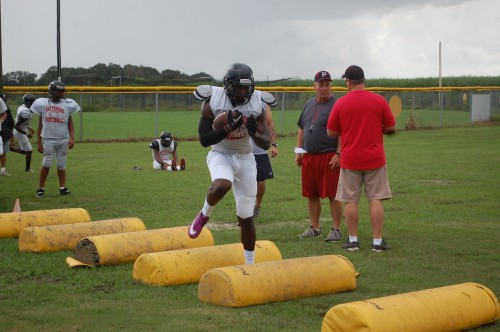 Not very many familiar faces are walking around the Patterson High School football locker room this summer.

But Lumberjacks coach Tommy Minton and his players have a clear message for everyone in advance of the new season – these new kids can play, too.

With a brand new cast of characters at almost every position, Patterson is eager to show it can remain among the Tri-parish’s best in 2012 after rolling through last year’s regular season undefeated.

“When you look at it, we’ve got 81 kids out there and we’ve only got nine seniors,” Minton said. “That’s a really, really young team. But I feel like we’re a really talented football team still. We’ve just got to mature and grow up.”

“It’s our turn now,” offensive guard Kelon Bourgeois agreed. “It’s time for a few new guys to show that they can do some pretty special things, too.”

Offensively, the Lumberjacks return just a couple starters from last year’s dominant unit that averaged more than 50 points per game in 2011.

Despite inexperience, Minton added an interesting point about his slew of new starters, saying that he believes they are battle tested.

“These kids all have a ton of experience because in a lot of our games, they were playing the full second half because we were ahead by so many points,” Minton said. “Young? Yes. But they aren’t new to the field.”

Quarterback Denzel Johnson will take over Patterson’s offense after serving as Jones’ backup for the past few seasons.

Minton believes the big, left-handed quarterback he will have a strong season.

“We’re excited about him,” Minton said. “We think he’ll be a good quarterback in our system.”

Johnson wouldn’t boast about his own abilities, but he said he is ready to finally have control of the Lumberjacks’ offense.

“I’m ready,” he said. “I’m excited to finally be able to be the leader of our offense. It’s a little different being a starter compared to the backup, but I learned a lot from Justice and I think everything will be great.”

If Johnson has any growing pains, he has an elite wide receiver to turn to.

Standing 6-feet, 3-inches and weighing 230 pounds, the Arkansas commitment will be a security blanket to the new quarterback.

“Having him helps, definitely,” Johnson said. “That’s a big, sure-handed target to turn to if you need someone to make a play.”

“He figures prominently into our offense, most definitely,” Minton said.

When defenders key on Skinner, Minton said the Jacks also have a slew of young playmakers who are ready to push for yardage.

“We have a whole stable of younger guys stepping into key positions and they all have potential to be really, really good football players,” Minton said. “I think people will hear some names early in the year that will be new, but that will start to become familiar really quick.”

On defense, Patterson returns linebacker James Tarleton after he ranked third on the team in tackles in 2011.

The Jacks also have back Lerod Todd and Kendall Hunter in its defensive backfield.

“They were both All-District players last year and they are both back,” Minton said. “Together with Tarleton, we’ll lean on those guys a little bit.”

Bourgeois said so far, the team’s defense has been stout.

“They are talented,” he said. “They aren’t afraid to hit a little bit and they are all doing their jobs.”

The coach said he wants to see if that remains the case in live action.

“We want to see how they respond when they get hit in the mouth a little bit,” Minton said. “That’s the next test.”

Patterson’s schedule could allow for a little breathing room.

Being able to get off to a fast start is important to the psyche of the Jacks who stress that they can again make a run – whether they have big names or not.

“When those last kids started at the beginning of their career, they weren’t big names then,” Minton said. “Now it’s these kid’s turn and everything is sort of running full circle.

“It’s like the cycle is starting over at Patterson. And I think we have enough talent to succeed with the group that we’ve got. We’ve got some good athletes and we’ve got a lot of kids who have worked really hard throughout the spring and summer. Every year is a new year.”

Patterson wide receiver Deondre Skinner runs through a drill during a recent practice. The Lumberjacks believe their young players have enough talent to make another playoff push.