Young versus old: Does LSU have a QB battle on its hands?

Back to School Q&A – Mayweather or $100 from McDonalds

Nicholls soccer to begin this week 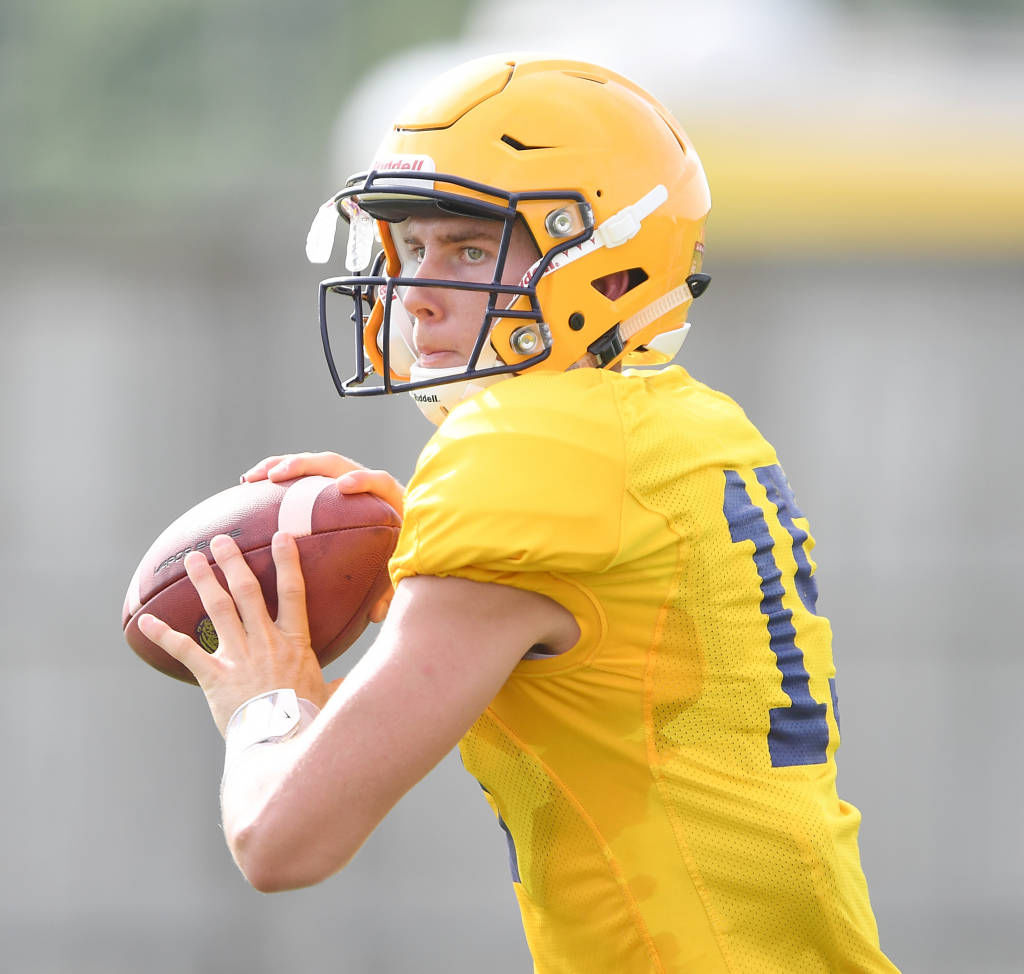 And the Tigers, at least on paper, still don’t have a starting quarterback to build their hopes around.

All throughout the offseason, LSU fans have assumed that fifth-year senior Danny Etling would earn the position after the steady showing he had last season as a junior.

But first-year coach Ed Orgeron has kept an open competition throughout the offseason – a competition that’s still ongoing at press-time.

In fact, Orgeron has gone out of his way several times in media appearance to talk up true freshman Myles Brennan, even going so far as saying that Brennan is a guy capable of starting as a freshman.

The competition, Orgeron said, is ongoing.

And while almost everyone concedes that Etling is still the favorite, it appears that Brennan is proving worth the hype so far in camp.

“His release and his ability to throw the ball is very special,” Orgeron said of Brennan last week at a media appearance. “I tell you what – it’s just fun, fun to see the ball come out of his hands, you know?”

There are cases to be made for both players.

Etling is more of a sure thing – a proven, steady game manager who has proven capable of navigating offenses through SEC-caliber defenses.

In three seasons of major-conference collegiate action, Etling has passes for 4,613 yards with 27 touchdowns and 17 interceptions, while completing more than 55 percent of his passes.

The senior started several games earlier in his career at Purdue before transferring to LSU. In those games, Etling enjoyed limited success, given the lack of talent around him.

With the Tigers, Etling sat out the 2015 per transfer rules, then was called to action early in 2016 after incumbent starter Brandon Harris struggled.

Etling was quite serviceable in relief, starting 10 games and completing 160-of-269 passes for 2,123 yards, 11 touchdowns and five interceptions.

The Tigers were 7-3 in those games, including a 29-9 victory over Louisville in the Buffalo Wild Wings Citrus Bowl on New Year’s Eve.

The storyline surrounding Etling throughout the offseason has been his health.

He completed spring practices this offseason then had back surgery for an ailment he said bothered him all throughout last season.

At the Manning Passing Academy in June, Etling said he wasn’t yet 100 percent, but was feeling better than he ever has in his college career.

At the start of camp a few weeks ago, Etling said he was more than 90 percent, but would be 100 percent before the start of the season started.

“I’m excited for my senior season,” Etling said at the Manning Passing Academy. “We believe in the group we have in the locker room. We think that we all have something to prove and I think our guys are all just eager to get to work together. We’re all excited about playing for Coach (Matt) Canada. I think it’s something we’re all very eager to be a part of.”

Etling is a known entity.

He likely won’t be spectacular, but will be steady and capable – given the great talent on LSU’s roster.

Brennan is more of a fire cracker, and fans tend to fall for the great unknown.

The freshman pocket passer is one of the most anticipated incoming quarterback prospects since Ryan Perrilloux in 2005.

At St. Stanislaus in Bay St. Louis, Mississippi, Brennan was one of the best statistical quarterbacks in the history of prep football.

As a senior, Brennan was lethal, completing 275-of-399 passes for 3,982 yards, 48 touchdowns and just three interceptions.

As a junior, Brennan was actually better, tossing for 5,248 yards and 53 touchdowns – output which put him on recruiting boards around the country.

Brennan committed originally to former LSU coach Les Miles. He briefly decommitted from the program while LSU’s coaching situation was in limbo.

But after a brief re-recruitment, Orgeron and new offensive coordinator Matt Canada sold Brennan on how he’d fit into LSU’s new-look offense, which led to a re-commitment and his signing with the Tigers.

Brennan didn’t graduate early, so he wasn’t with the team for spring practices – unlike fellow freshman signee Lowell Narcisse, who is also in the mix.

Despite the late start, Brennan has caught on quickly – enough to earn high praise from his coach.

Orgeron said Brennan has generated a few first-team reps so far in camp and has impressed in every opportunity he’s been given.

Legends and current players see it, too.

Receiver D.J. Chark said Brennan is a spark plug at quarterback – the kind of guy that receivers like to run routes for.

“It’s always a catchable ball,” Chark said at a recent media session of the young quarterback. “It’s never a fast, out of control ball. That’s rare in a young guy.”

Former LSU quarterback Rohan Davey agreed and said he watched an LSU practice and thought Brennan was the best quarterback on the roster.

“He’s the real deal,” Davey said on a radio interview.

But for all the praise that’s being given to Brennan, most media members still expect Etling to take the first snaps when LSU opens its season in early September.

But how long it’ll last is now uncertain.

Etling is proven, but Brennan is coming on strong.

After a decade of limited quarterback play, the Tigers now seem to have depth at the position.

I’m sure LSU fans will take it.