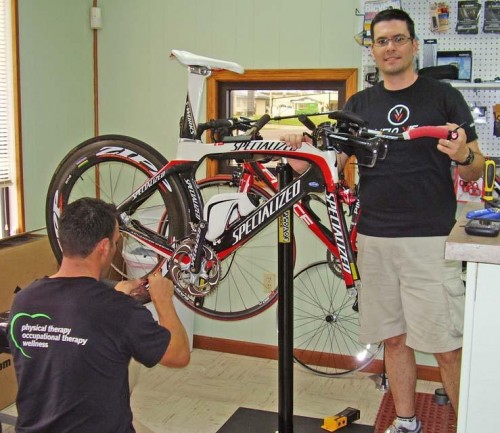 Thibodaux native Rod Russell has been on the fast track since August.

He and his family were living in New Orleans when his wife decided to join the family business at Sanders Dental Group.

That meant a move to Houma – without a job for him.

“If that was the case, I wanted to do something that would be enjoyable, fun and would fulfill a need for the area,” Russell said.

So he opened BG Bicycles. By the way, BG doesn’t stand for anything. “It just came to mind,” the owner said.

Russell admits he was afraid that things would be slow in the beginning.

But as luck would have it, the first week BG Bicycles was open, a couple of customers asked if Russell had talked to anyone from the Bayou Country Cyclists Green Team.

He hadn’t, “so they told me to talk to Cristiano, the restaurant owner. I called, he came over and saw some of the stuff we were unloading. Now we’re doing helmets and jerseys for the Green Team,” Russell said.

Within two months, the business has already outgrown its location. An expansion to a roomier building next door is in the works.

Russell’s shop is fast becoming a hangout for locals serious about their bikes. Customers seem more like old friends as they come in for maintenance or repair tips on their bikes.

It’s the comfortable, relaxed atmosphere that helps Russell get a better understanding of his customers and what their biking needs are.

While BG Bicycles does sell manufactured bikes, “some people really need a custom bike. They need to be able to go from the frame up and be able to build a bike to fit their budget and their needs,” Russell said.

These aren’t ordinary frames. These are the frames athletes such as Lance Armstrong are using. They’re durable, comfortable and very light.

“You can have an aluminum frame with a carbon fork and from there your next step up is a carbon frame. What varies on the carbon is the grade. If the grade is higher, the frame is lighter,” he said. These frames affect the handling characteristics and ride quality of the bike reducing wind resistance and vibration.

“The other thing about carbon is that since you don’t get a lot of road vibration, you’ll be able to ride longer than you were before and you’re not as tired,” Russell said.

Once a frame is chosen, the customer moves on to the rest of the build. An obvious first decision is the seat.

“A seat really is almost 100 percent personal preference. It’s one of the things you have to try and see how it fits you,” Russell said.

What’s comfortable for one person just won’t do the trick for another. Russell said it’s a trial-and-error process until the right seat is fitted to the bike.

Decisions also have to be made on whether the rider wants to sit up or stretched forward while on the bike. This affects the style of handlebars, seat and how they’re set up.

Even the pedal design has to be decided on. Today’s models are lighter and have clips similar to ski boots.

“Time (from France) isn’t heavy but what you’ll notice is the quality of the bearings and it falls correctly straight up and down which is important. It’s the world’s fastest pedal to clip in and out of,” Russell said.

South Louisiana roads can offer bikers a few challenges. Russell explained Continental Gator Skins work well and “Vredestein from the Netherlands are a real heavy-duty tire with a thick Kevlar belt all the way through the sidewall to prevent punctures. It may cost a little bit more but it saves you tubes and headaches in the long run,” he said.

So that’s it right? The bike has everything it needs and is road ready. Not so fast.

“It’s a law. You can be cited if you don’t have them. I have a two and four LED light. For someone who wants something that’s bright and visual, we mount them on the front and back of the bike. We can go as bright as you want,” Russell said.

BG Bicycles also stocks anything and everything the serious rider could want from shorts with padding “so that after four to 50 miles you’re not mad at yourself for what you have on,” to shirts, shoes and helmets.

“The Garmin’s are huge. A lot of the runners and tri-athletes use the Garmin waterproof watch because there’s a heart rate monitor attached. You can download the data from your ride, your speed, calories burned, your time on the bike and track it on a computer training program,” Russell said.

If all this sounds like it’s too much and a potential customer can’t possibly catch on, don’t worry. Russell spends a lot of time explaining every aspect of a bike – how it’s put together, how to maintain it and even how to make repairs.

BG Bicycles sells the tools and supplies needed to keep any bike on the road and even carries a rack to make maintenance and repairs easier for the owner.

“The rack makes it more stable and so you’re not having to reach around and keep the bike steady at the same time. It’s a really nice tool,” Russell said.

Not every BG Bicycle is a custom bike. Russell sells hybrid bikes that are a marriage between a mountain bike and a flat bar road bike. It has knobby tires for grip, front-end suspension and hydraulic disc brakes. Riders can use this bike in the subdivision or one the trail.

“You have to be willing to work with people and be able to guide them and find out exactly what it is they need versus want. I think that’s one of the things that we’ve done and been very successful since we opened just last month,” Russell said.

And who knows? Maybe next month BG Bicycles will be settled into its new digs with plenty of space for local bicycling enthusiasts to come and hang out.

“I want to have a little coffee area. It’ll be nice to come in and grab some coffee and maybe have some seating to give it more of a European feel – kind of like Lance Armstrong’s half-bike/half-gourmet coffee shop. And then every once in a while on a Friday night, do a Belgian beer night,” Russell said, chuckling.

BG Bicycles owner Rod Russell and customer Clint Austin work on Austin’s bike. Russell’s shop has been open since August and has already attracted customers from as far away as Harahan. JENNIE CHILDS