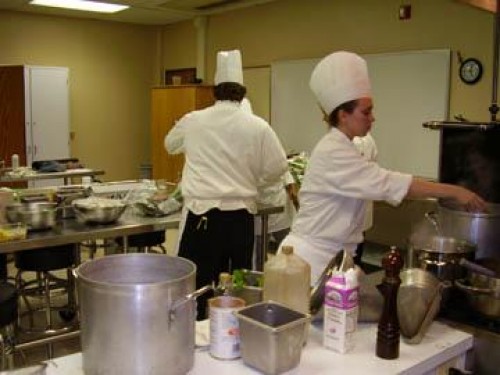 Whether it’s chopping carrots or slow roasting duck, the John Folse Culinary Institute, named after renowned Chef John Folse, has been serving the Nicholls State University students as an independent academic college of culinary arts since 1996.

Kaslow is in his seventh year with the culinary program and he believes with its namesake known around the globe the program is dedicated to the preservation and advancements of the rich culinary heritage of Louisiana.

“The Institute is filled with world class instructors who promote the understanding of history and diversity through culinary education for the academic community as well as the general public, both nationally and internationally,” he said.

Louisiana’s top chefs have served as guests at the Institute, sharing their expertise on Cajun and Creole cuisine, Kaslow said. The guest list reads like a “Who’s Who” of chefs, including Leah Chase of Dookie Chase’s in New Orleans, Pierre Sauvaget of the Bel-Air Bay Club in Santa Monica, Calif., Hartmut Handke of Handke’s Cuisine in Columbus, Ohio, and Gaetano DiSalvo of DiSalvo’s Station in Latrobe, Penn.

“We provide an opportunity for the students to study indigenous foods and traditional culinary preparation of Louisiana,” he said. “We allow the students to become familiar with the regional cuisines of the United State and the world.”

In Kaslow’s opinion the institute has dedicated itself to helping their students be at the high point of their games in the culinary industry while striving for academic excellence.

Several of the Institute’s culinary students have gone on to work at some of the popular restaurants in the Tri-parishes. Included among them are Bayou Country Club, Caf? Milano, Cannata’s, Caro’s Cakes, Cristiano’s Italian Restaurant, Envie Restaurant Oyster Bar, Flanagan’s Restaurant, Fremin’s Restaurant and Sodexho Catering.

“Some of them have even open their own restaurant since graduation,” Kaslow said. “Like one student has his own restaurant in Mandeville called the 124 Restaurant & Spirits.”

The program aims to open the student’s eyes to the possibilities.

“When the students reach a higher level of skills, its our duty to get them ready to compete in the industry,” he said. “We just try to give the students an opportunity to get their foot into the door with our career placement program.”

Graduating senior Joseph Rouchon of Clinton is pleased to say he has grown since his first year as a culinary student at Nicholls. He said his attitude has change as well as his approach to life.

“The instructors take time out to break things down and show you how it’s supposed to be down,” Rouchon said. “They are really not afraid of getting their hands duty.”

Kaslow said he believes that Rouchon is a fine example for the younger students; the Clinton student gives them hope of what they could be once they have reached his skill level. Rouchon’s charity caterings events help mold him skills outside of the classroom.

“Joseph has experienced a lot things in the culinary arts that will last him a lifetime including his externship with Master Chef Ed Leonard in Rye, N.Y., at the Westchester Country Club,” Kaslow said.

“I have always had a passion for cooking, I guest it goes back to my Italian roots,” Rouchon said. “I have worked in family kitchen since I was a young child waiting for the chances that I have today.”

The 25-year-old student says that being a Master Chef is many years away put he’s going to take this opportunity to gain all the knowledge he can from instructors like Chef Kalsow and Master Chef Leonard as well as his life experiences.

Programs of Study: The Institute accepted its inaugural academic class in January of 1996. As an independent academic college of Nicholls State University, the Institute awards the Bachelor of Science and the Associate of Science degrees in Culinary Arts. Nicholls State University is fully accredited by the Southern Association of Colleges and Schools. The 133-hour bachelor degree and the 69-hour associate degree programs are comprised of general education, culinary and related courses and field externship experiences.