With an Extra Dosage of Christmas Postage 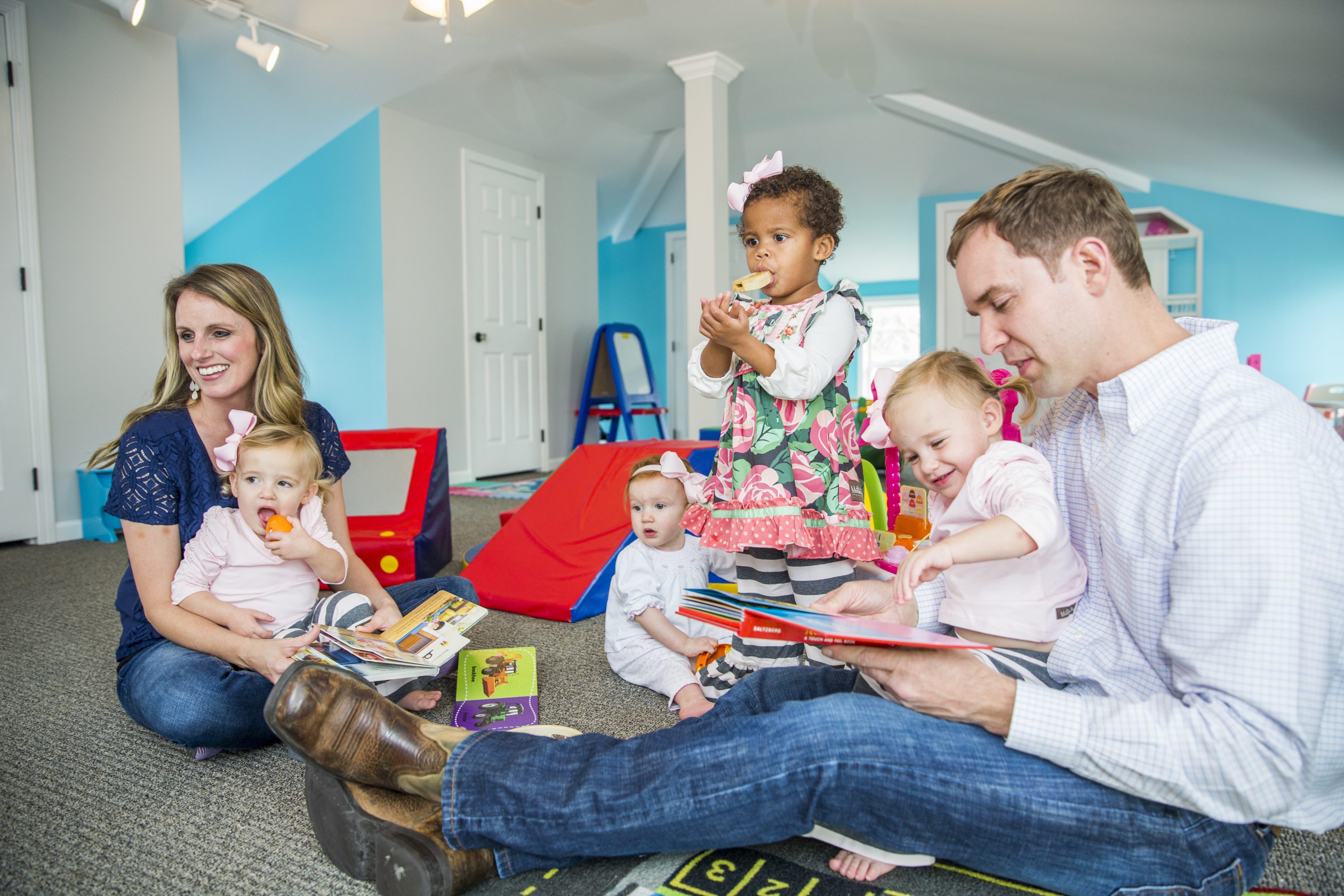 The last eight years of Kayce Danos’ life could be described by countless words.

Challenging. Between the uncertainty, the questions, the shots and medications, there have been challenges at every turn.

Joyful. While her life went down unexpected paths, there was no shortage of joy at the hands of unexpected gifts and changes.

As Kayce now sits in a home full of toy houses and play mats and baby-proofed door handles—a home she shares with her husband Mark and their children—the word she uses to describe those eight years is gratitude.

“It’s not anything I ever expected or wanted to go through, but…I could cry thinking how grateful I am for the whole journey,” Kayce says.

The mother of five knew she always wanted to be a mother. She knew she would have a home full of children as she does now.

The road that has led her to that point, though, was not the one she planned on taking. It’s been challenging, it’s been joyful and it’s been one powered by love and faith.

Kayce and Mark married in November of 2012. By December of 2013, the couple decided they were ready to start adding to their family.

After a few months of trying without success, Kayce’s doctor told her to report back if she still wasn’t pregnant by the time she had been off of birth control for six months. She waited until the eight-month point.

It was then that the couple learned they would struggle with something that hopeful parents long to never face: infertility.

“I remember at the beginning just having so many questions, like never walking away from my faith, my faith was always the foundation of who I am, but…I just remember having a lot of questions, and it’s okay to ask God questions, like ‘Why?’ Kayce says. “Lord, why? Why can’t we get pregnant? Why isn’t this happening for us?”

Kayce began taking Clomid, a fertility medication that intends to stimulate ovulation, on her and Mark’s two-year anniversary in November of 2014.

Another setback would find its way to Kayce’s journey, though. She learned that she had a cyst at the time, which would require her to stop taking Clomid so that the cyst would not grow to a size that needed surgical removal.

When her cysts cleared and she finished her final round of Clomid with no success, Kayce turned to intrauterine insemination (IUI). The treatment proved also to be unsuccessful after four attempts.

The next step would be in vitro fertilization (IVF), a treatment that Kayce was hesitant to consider.

“I was very unsure about it. It was something I was not very open to…I just assumed I would get pregnant before I got to that point, and that was our next option,” Kayce says.

Through Kayce’s struggles and setbacks, it was her Christian faith that kept her going. She says her faith has always been the most important part of her life, and it has helped her to believe that God has had a plan for her in the midst of her difficulties.

It’s also her faith that allows her to look back at her life and recognize the way her dream family was beginning to take shape—that she would indeed become a mother, even if that dream looked a little different than she imagined.

“What I didn’t know at the time was everything else that was going to happen, like never would we have gotten involved with fostering and [adoption]…Looking back, I really see how the Lord’s hand was in the whole process. He’s like, ‘Just wait, I have a family in mind for you,’” Kayce says.

Kayce and Mark began to consider fostering children after Kayce heard a story about six sisters who had been separated from one another in the foster system. The couple decided to look into taking the girls into their care. Though they ultimately were not able to foster the sisters, the couple went through the steps required to become foster parents. Their first foster children were a group of sisters who stayed for only six weeks.

Kayce and Mark then welcomed a little boy into their home through foster care—a boy who, unbeknownst to the couple at the time, would be officially adopted into their family a few years later.

“That was kind of the start of it all. We can do something bigger than what we’re doing now,” Kayce says.

Kayce quickly learned the challenges and rewards that go along with being a foster parent. She says the hardest parts are the transition that occurs for both the child and the parents, as well as the unknown and the lack of control over the situation. The reward, of course, is the joy of getting to love each child.

The Danoses wound up fostering between 15 to 20 children in total. Kayce says they made it a point to treat each child they welcomed into their home as part of their family and to love them as if they were their own children.

The couple wanted to do even more, though. In 2016, they decided to begin pursuing adoption.

“I always wanted to adopt a baby, so then when we started our infertility journey, that was always in the back of my mind…Throughout the process we had been given several opportunities for adoption but just never felt like it was the right time,” Kayce says.

While Kayce was volunteering at Hope Restored Pregnancy Resource Center, an opportunity for adoption presented itself, and the couple committed to it in March of 2016. Along the way, they developed a relationship with the birth mother and were even present the day their daughter was born in October of that year.

As Kayce’s foster care and adoption story was unfolding, another story was just beginning.

All while welcoming the first two young members of their family, Kayce would begin her IVF treatments. An egg retrieval was performed in the summer of 2016, and one baby successfully implanted.

Kayce says she believed she was carrying two babies, though. At her second ultrasound, she learned that it was not just a feeling.

“At first we only saw one little sac, but I just kept [saying], ‘I know there’s twins. I know it.’ So, when we went back and saw there were two, all I could do was just laugh,” Kayce says.

Naturally, Kayce began to experience a new set of fears and doubts throughout her first pregnancy.

“Okay, we’re pregnant, but we still have to make it to the end of a pregnancy. Like, can I carry a baby? I don’t know, I’ve never been pregnant before. We’ve had all these struggles. This isn’t the end. We’re just beginning now,” Kayce says.

However, her fears were not realized, and she gave birth to her twins in November of 2017.

In just a short time, a couple that once learned its dreams of starting a family would be more difficult to reach than expected was a family of six.

And yet, the story didn’t stop there.

When the twins were only eight months old, Kayce began to experience the same sciatic pain and sickness she experienced while pregnant for them.

“A light bulb went off in my head. I remember telling Mark, ‘I’m either getting sick or I’m pregnant, but I feel so bad, like just so nauseous,’ and he was like, ‘Well, you’re not pregnant,’” Kayce laughs.

Kayce was in fact pregnant. For the first time, she was pregnant without the help of medicine or treatments.

“We had never experienced pregnancy on our own. I mean, we tried for years and nothing ever happened…but we knew there was always a chance,” Kayce says.

Who knows where the Danos’ unexpected journey will take them next. For now, Kayce says if there’s anything she could tell the woman who found out years ago that she would struggle with infertility, it would be to just wait.

“Just wait. Life is going to be so good. Right now you’re not sure what’s going to happen…You think you’ve reached the end, but it’s so [much better]. Just wait,” Kayce says.

And good it is. There’s Zay, the energetic former foster child who’s “all boy” and loves to be a helper and a leader; Lucy, the sweet little nurturer who takes her baby doll Annie everywhere she goes; Lillie, the “daddy’s girl” who’s reserved, but determined and unafraid; Gracie, the “mama’s girl” with a big personality and a compassionate heart; and Maggie, the happy “angel baby” who’s always smiling.

Kayce says she’s thankful for the support of her family and friends around her who showed no shortage of encouragement, prayers and excitement throughout her journey.

Of course, she’s especially thankful for Mark, the man who’s been by her side through it all.

“He was my rock. Whenever any struggle or any change happened…he was the one who would help me through it all. He was so understanding, and a listener, and just supportive” Kayce says. “We’ve both been changed through the process,” Kayce says.

Kayce has documented her story since the very beginning on a blog known as “Punchbag Ponderings,” a name that represents the frustrations she felt that were accompanied by trust in God’s promises.

Her story is a testament to waiting and hoping and trusting that, no matter what the road looks like, every person will end up where they are meant to be. She hopes her journey will encourage people who are facing their own struggles to look for the light in darkness.

“There’s light in dark situations and dark circumstances. Look for the light and cling to hope…God does have a plan. He is with you, and He does not leave us or forsake us,” Kayce says. POV 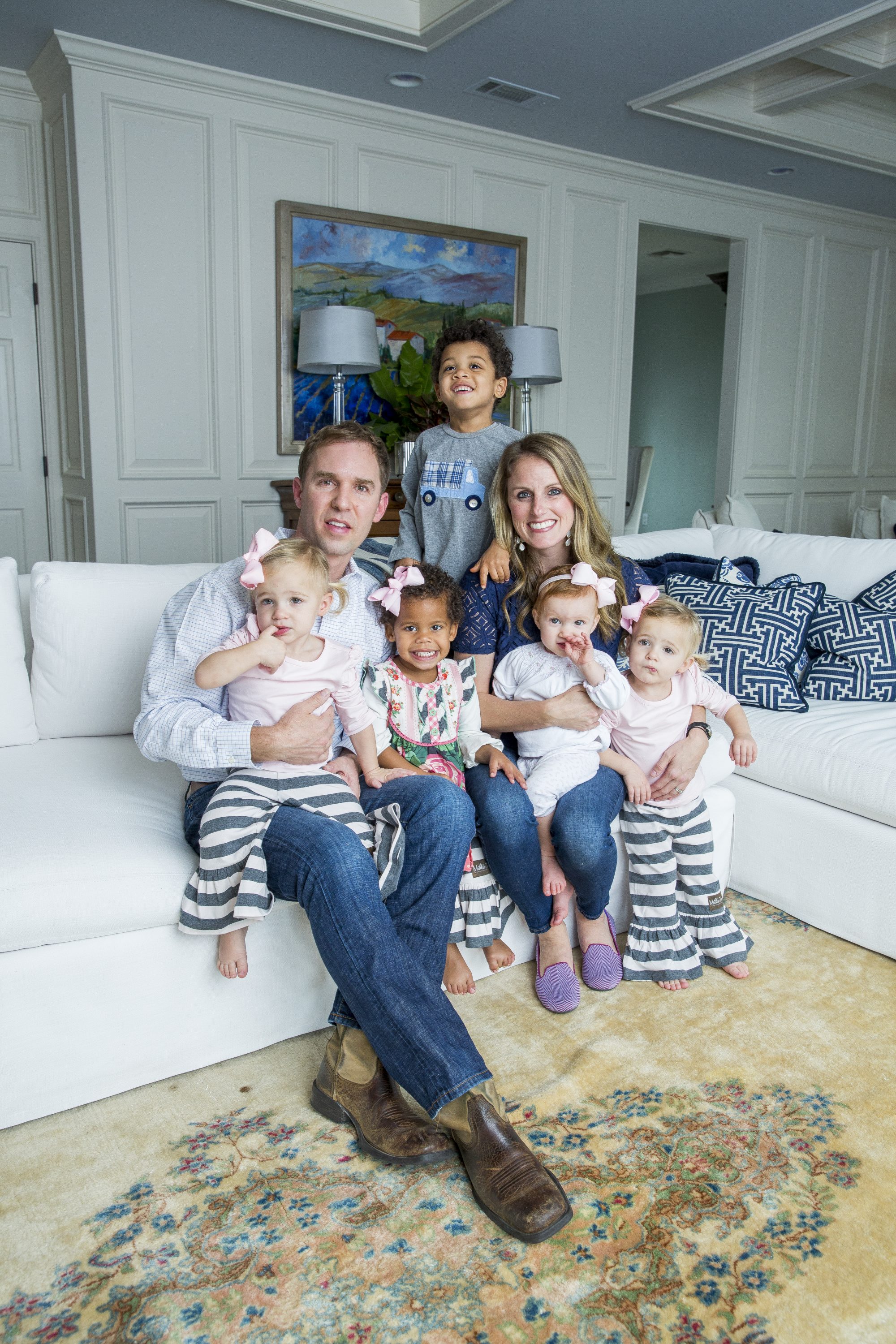 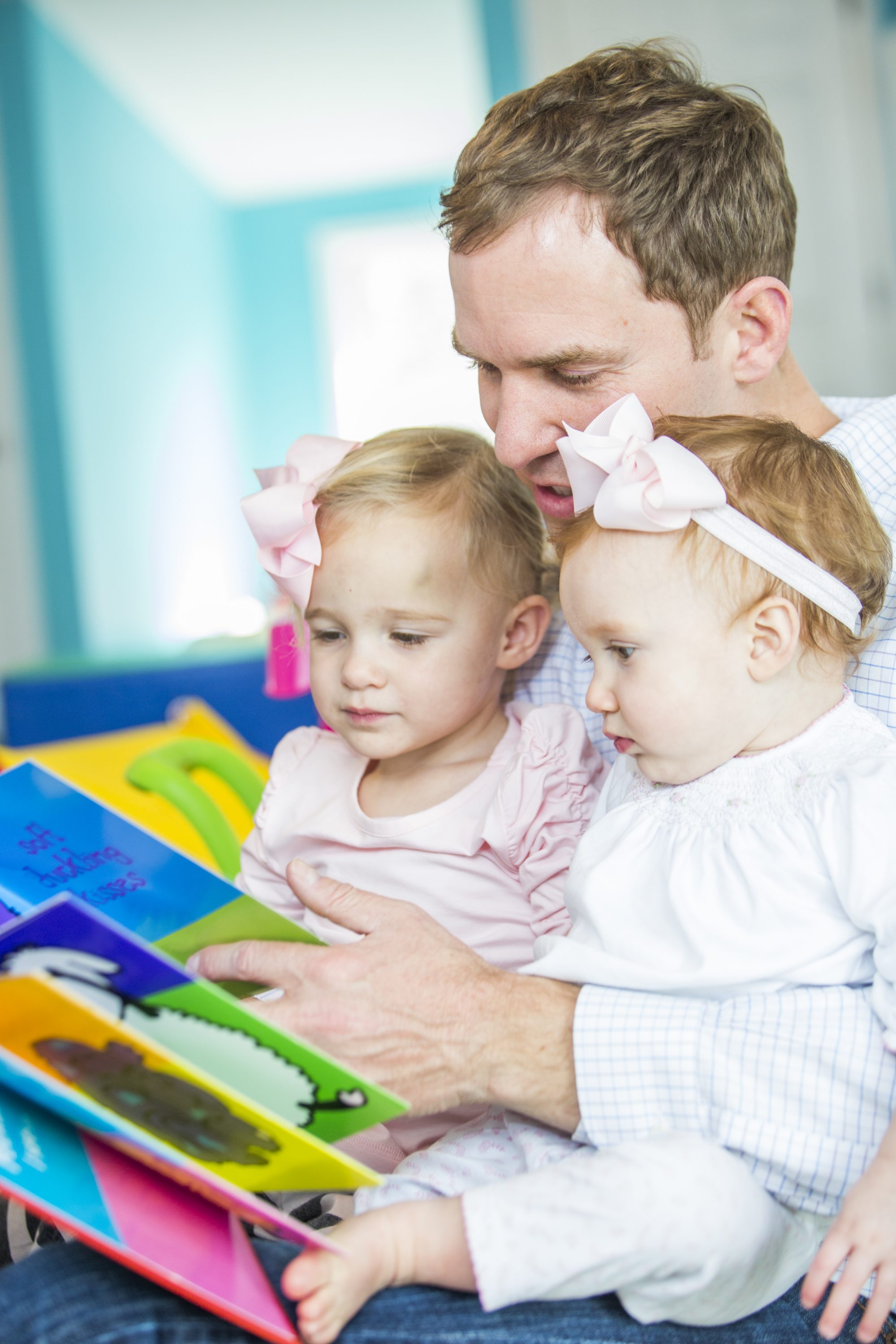 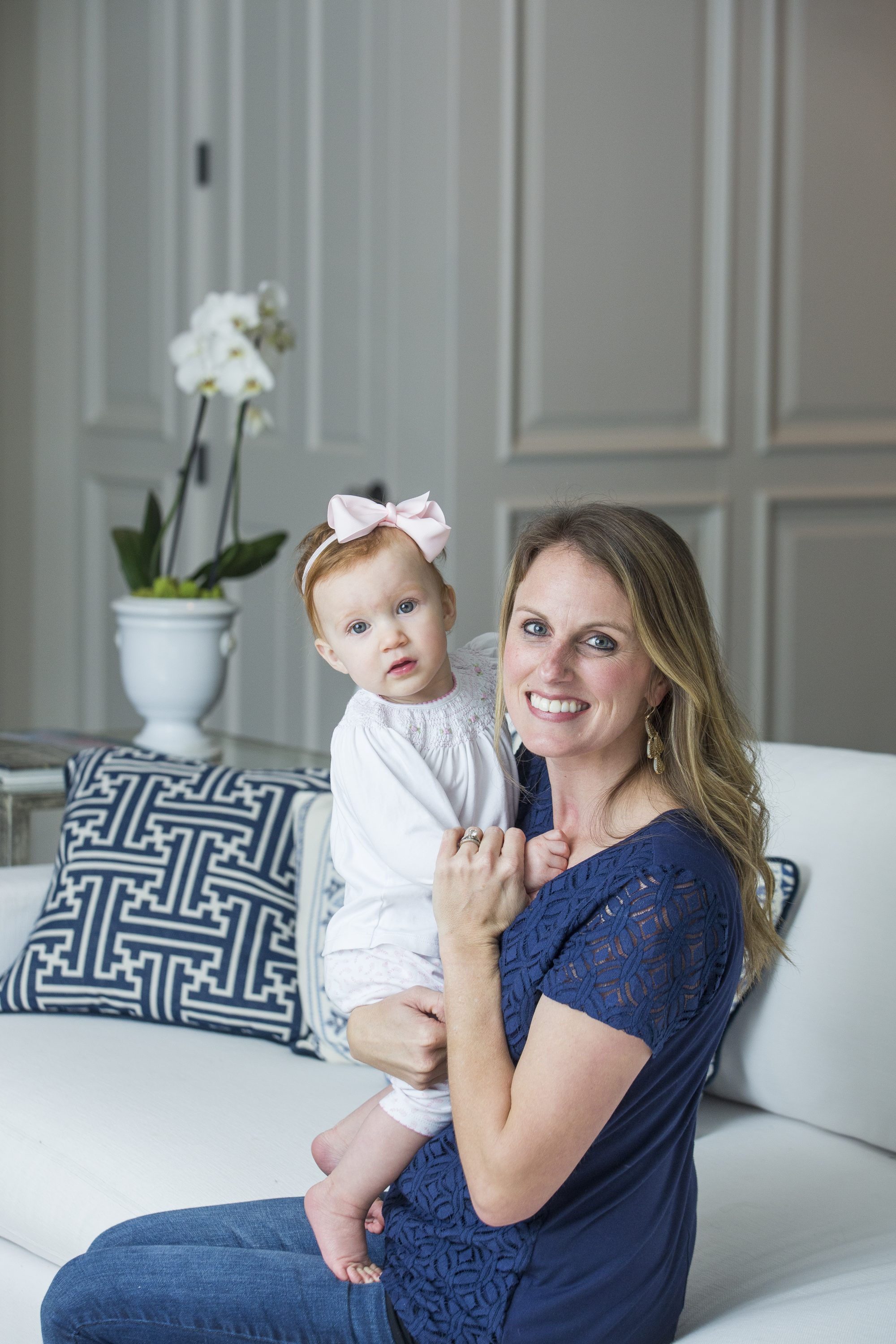 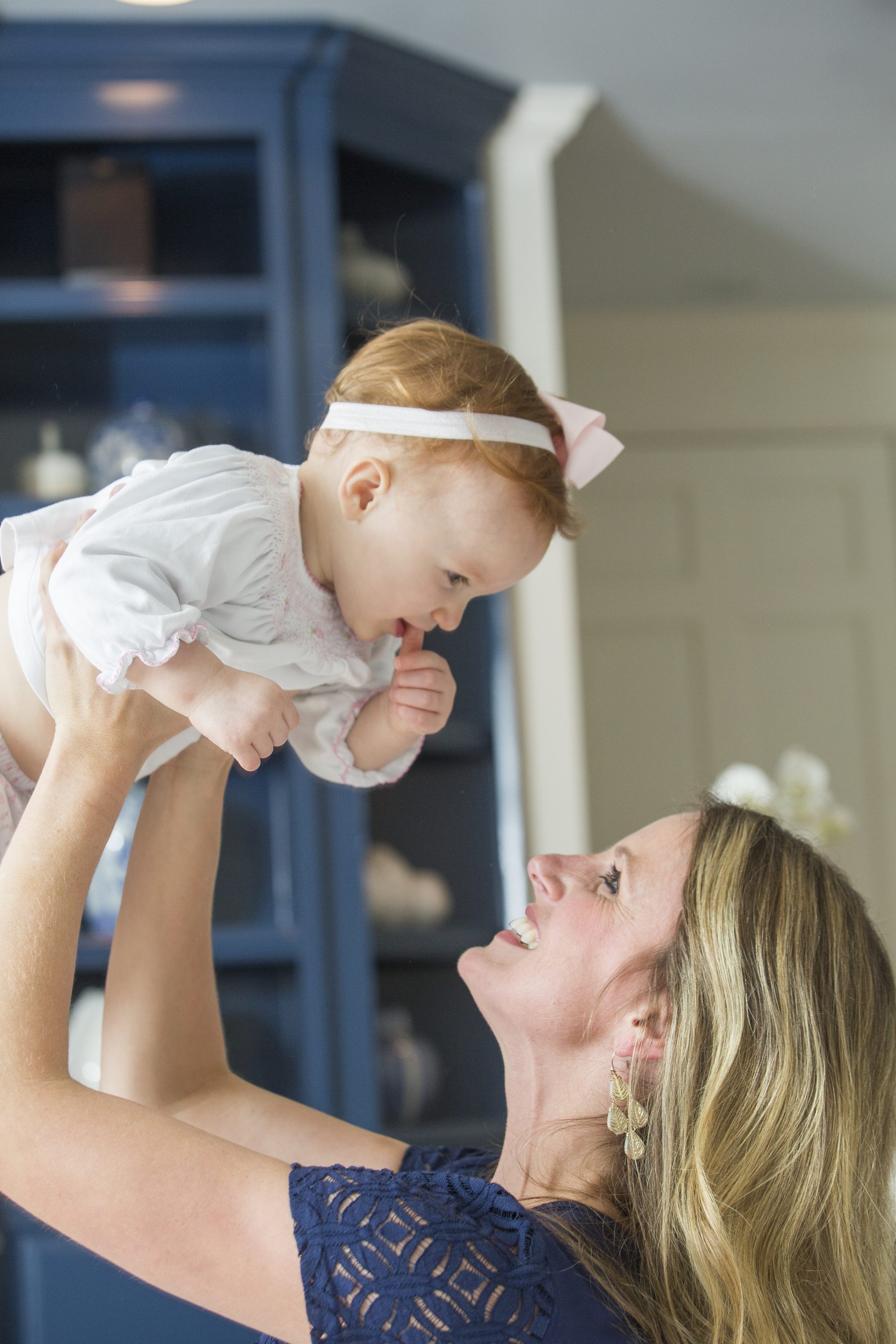