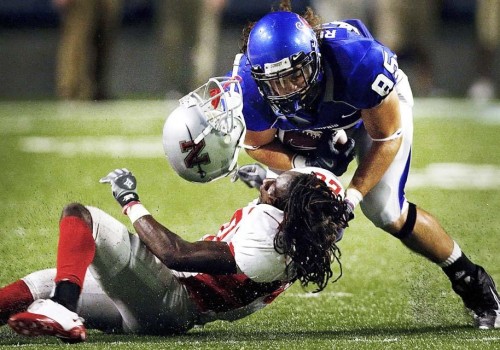 There is a lot a team can learn by just playing their first game.

It took a while but the Nicholls State Colonels finally took the field against the Memphis Tigers Saturday, falling to the Tigers 31-10 in front of 22,167 in Liberty Bowl Memorial Stadium.

Even in the loss, Nicholls State head coach Jay Thomas found a reason to be positive, as the two teams were tied at 10 at halftime.

“I’m extremely proud of our guys,” he said. “They came out pumped up for the game and kept that tone the whole game.”

The highlight of the night for the Colonels was senior Lardarius Webb returning a blocked field goal 70 yards for a touchdown.

Costly turnovers hurt the Colonels as they fumbled the ball three times. They were also out gained 449-164, notching only 29 yards in the entire second half.

Now that they officially have a game under their belt, Thomas said he knows what to get back to work on this week.

“There were a couple of drives where we shot ourselves in the foot,” he said. “We had a big run that was called back for clipping, and turned the ball over before half. We did have signs of being able to do some things, and it was easy to see that we are still rusty in some areas.”

Both seniors Vince Montgomery and Chris Bunch saw reps at quarterback and a total of 10 Colonels had their name in the rushing column of the stat sheet. Senior Jerald Watson led the charge, gaining 37 total yards on four carries.

After giving up a field goal with 4:38 to play in the opening quarter, the Colonels found themselves leading 7-3 after the Webb touchdown with 12:02 to play in the first half.

Unfortunately for the Colonels, the second half belonged to the Tigers as they outscored the Colonels (0-1, 0-0) 21-0 the rest of the way to secure their first victory.

Curtis Steele led the charge for the Tigers, compiling 109 yards on 20 carries, while quarterback Arkelon Hall went 16-for-30 for 173 yards and one touchdown to help the cause.

Now, Thomas and the Colonels have tape to watch to see where things went wrong. Thomas said he hopes to use this weekend’s bye week as a chance to get back to normal, as another road game awaits the Colonels next Saturday (Oct. 2). The Colonels are set to travel to Northern Iowa to play the Division I-FBS power. The game is set for 7 p.m. and will be broadcast on ESPNU.

He knows it won’t be easy, but Thomas anticipates his team to be up to the challenge.

“We didn’t give up at the end and a lot of it wasn’t pretty,” Thomas said. “But it’s a starting point that we can use to prepare ourselves this week for Northern Iowa next week.”