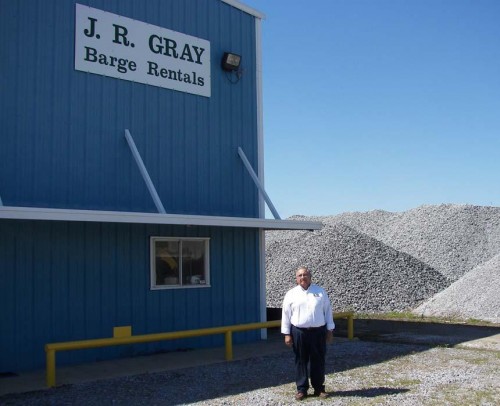 G&H Barge has been in East Houma since 1996, but the company is part of a much older operation – J.R. Gray Barge, founded in Thibodaux in 1947.

The company’s dry dock, which currently can service vessels weighing 750 tons, was the recipient recently of a federal stimulus grant that will fund the widening of the structure and allow it to handle heavier vessels.

Parts for expanding the dry dock will be built on-site at the company’s fabrication facility, Hernandez said.

G&H (the initials stand for company president John Gray, grandson of the founder of J.R. Gray Barge, and Hernandez) was established to build barges in the fabrication facility at the site in addition to repairing the vessels, but Hernandez said the company has not constructed a barge in several years.

Most of the company’s business is repairing the barges leased by J.R. Gray, which moved to the Dean Court site in 1996.

“We do dry-dock other companies’ vessels, a few local towboats, but it’s primarily barges from J.R. Gray, ” Hernandez said.

The nine workers employed by G&H repair around 60 barges a year. “We keep something on the dry dock year round,” he said. The company also does topside repairs outside of the dry dock.

Nearly all the vessels serviced are ones used on inland waterways, but G&H does repair ocean-going U.S. Coast Guard boats, Hernandez said.

The dry dock can accommodate vessels up to 200 feet long. For topside repairs, G&H can handle vessels as much as 300 feet long.

Before joining G&H as vice president in 1996, Hernandez traveled the country selling limestone for Martin Marietta Aggregates, which has a location in Houma.

Because of his expertise in that area, in 2002 G&H began offering limestone, which it keeps on-site. Oil and gas companies use the rock in rig pads placed beneath drilling barges to stabilize the vessels.

“G&H was founded to handle barge repair,” Hernandez said. “We got into limestone because of my background, to help us through the tough times.”

G&H transports the limestone to drill sites on J.R. Gray rock barges. The vessels can only be used in shallow water no deeper than 5 feet.

“We load the barges to a 5-foot draft,” Hernandez said. “We can load barges to a predetermined draft. That’s our specialty.”

Ninety-seven percent of the limestone comes from a quarry in Kentucky. The rock comes to Houma in 10-foot draft barges carrying 12,000 tons at a time. Then it’s transferred to the lighter barges.

“They don’t load to a specific quantity (in Kentucky),” Hernandez said.

G&H also supplies river sand that is transported on rock barges, but the sand is not stored on-site because rainfall would wash it away. The barges have coaming, or walls, to contain the limestone and the sand.

Hernandez said both substances are sold for use in coastal restoration.

The company’s fabrication facility has a 10-ton overhead crane with a clearance of 20 feet and a 36-foot clear span left to right.

Hernandez was born in Bunkie, La., but moved to Morgan City at a young age. He said he enjoyed his years handling marine equipment for Martin Marietta Aggregates. He has lived in Houma the past two years.

The downturn in the oil and gas industry has not left G&H unaffected; the market for limestone has been low for the past nine months. “There’s been nothing like it in the past,” Hernandez said.

“Like everyone else, we’ve seen a decline in business,” he said. “It’s not been a good year by any standard. We were blessed to get the (federal stimulus) grant. It’s been a tough year but we meet our obligations.”

Frank Hernandez, vice president of G&H Barge, stands outside the company’s East Houma office, also the location of J.R. Gray Barge. Limestone, pictured in piles next to Hernandez and used in padding for drill barges, was first offered by G&H Barge in 2002. * Photo by MIKE BROSSETTE